Lemon Jail: On the Road with the Replacements (Paperback) 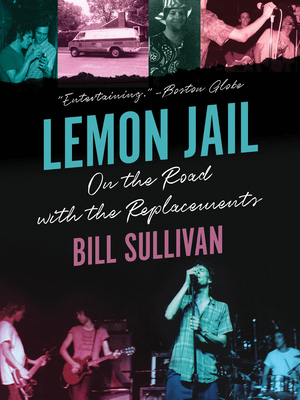 Lemon Jail: On the Road with the Replacements (Paperback)

“Don’t bore us, get to the chorus” is Bill Sullivan’s motto, which will come as no surprise to anyone who opens Lemon Jail. A raucous tour diary of rock ’n’ roll in the 1980s, Sullivan’s book puts us in the van with the Replacements in the early years. Barreling down the highway to the next show through quiet nights and hightailing it out of scandalized college towns, Sullivan—the young and reckless roadie—is in the middle of the joy and chaos, trying to get the band on stage and the crowd off it and knowing when to jump in and cover Alice Cooper. Lemon Jail shows what it’s like to keep the band on the road and the wheels on the van—and when to just close your eyes and hit the gas.

That first van, dubbed the Lemon Jail by Bill, takes the now legendary Replacements from a south Minneapolis basement to dive bars and iconic rock clubs to college parties and eventually an international stage. It’s not a straight shot or a smooth ride, and there’s never a dull moment, whether Bob Stinson is setting a record for the quickest ejection from CBGB in NYC or hiding White Castle sliders around a hotel room or whether Paul Westerberg is sneaking gear out of a hostile venue or saving Bill’s life at a brothel in New Jersey. With growing fame (and new vans) come tours with REM and X (what happens when the audience isn’t allowed to stand?), Tom Petty and the Heartbreakers and the Violent Femmes (against their will), and Saturday Night Live, where the band’s televised antics earn the edict You’ll never play on NBC again. Fast forward: You’ll never play Washington, D.C., again. Or Moorhead.

Hiding in fans’ backyards while the police search the streets and pelted with canned goods at a Kent State food drive, the Replacements hit rough patches along with sweet spots, and Lemon Jail reveals the grit and glory both onstage and off, all told in the irrepressible, full-throttle style that makes Bill Sullivan an irresistible guide on this once-in-a-lifetime road trip with a band on the make.

Bill Sullivan has been on tour since the early 1980s. After the Replacements and stints with the Del Fuegos and the Cherrybomz, he was tour manager for Soul Asylum, Bright Eyes, Conor Oberst’s Monsters of Folk, Yo La Tengo, Cat Power, The New Pornographers featuring Neko Case, Spoon, Syl Johnson, Teenie Hodges, and blues legend Jimmie Vaughan. He was co-owner of the 400 Bar on the West Bank of the University of Minnesota.

"As a guy who has had the privilege of being regaled by Billy's rock ’n’ roll tales for years, I can attest to the authenticity of his stories. They may not all be accurate, but they are all true, which is more important. He is a real link to our punk rock legends of lore. Any fan of the Replacements or any of the ’80s left-of-dial bands will greatly appreciate this book."—Conor Oberst

"Reading Lemon Jail makes me think back to when Spoon would play Bill’s club in the early 2000s: he’d lay the welcome mat out for us from the moment we got to town, and we’d always drive off with an extra case of Tecate and a bit of weed. No one else in the touring world gave us that kinda treatment. This book is tour story after tour story from one of the most genuine originals in the game. Bill Sullivan is the spirit of rock and roll road life."—Britt Daniel

"For fans who love the Replacements, this book is your only opportunity to go back in time and be a fly on the van wall. Bill Sullivan’s clever sarcasm, humble anti-rock star attitude, and complete access allow him to tell the band’s behind-the-scenes story perfectly."—Janet Weiss

"Bill Sullivan captures the spirit and chaos of the earliest and best years of the band accurately due to the fact that he lived it right alongside us. A true kindred spirit, a fifth member if you will, who from the git-go, got what we were about to the point where it would not have been the same journey without him. Billy had our backs and represented much-needed comic relief on many occasions. Lemon Jail should come with a warning: ‘Don't Try This At Home.’ It's a quick read and, in my opinion, the most successful book to capture the essence of our destructive, drunken outcast brigade in all its successes and foibles. Bill’s ever-present comic sense, woven throughout the book, paints authentically the circus world that it was. I laughed aloud many times!"—Chris Mars

"As every obsessive fan knows, there's been one essential voice missing from the recent wave of biographies, oral histories, and documentaries celebrating the storied and notorious legacy of the Replacements. This, then, is seriously great news, 'Mats​ droolers: Bill Sullivan has finally broken his omerta, and though no book could possibly contain Sullivan's legendary and seemingly bottomless trove of yarns—or quite capture his unparalleled ability to tell a story in person—Lemon Jail is a riotous, channel-surfing rip through his rubber-legged years with the band, and will more than tide us over until somebody gives the man the full-fledged biography his life deserves."—Brad Zellar, author of House of Coates

"Bill Sullivan was right there alongside the band, right in the thick of it, discussing specific shows, tours, and a million anecdotes. In addition to his words, Sullivan snapped hundreds of Polaroids which are sprinkled throughout the book."—Daggerzine

"Although brief in size, the book gives us another view of the turbulent madness that was the beloved ‘Mats. Tales of road-induced boredom, which with The Replacements always led to property destruction and dizzying hangovers, are of course recounted; but beyond the goofs lived people who for a brief moment created essential, meaningful art—which is why we continue to read about it, to try and recapture those moments."—The Big Takeover

"Lemon Jail is a must-read for any Replacements’ fans; it’s deeply personal and a fun ride."—NeuFutur

"Lemon Jail is at its best in moments that perfectly convey the state of pre-internet underground music in America, where house parties, college radio, and photocopied fanzines could propel a small hometown band into legend."—Pitchfork

"Old tour passes, disk camera photographs, notes and scraps of paper with art from drummer-turned-artist Chris Mars are just a few of the things Sullivan collected on the road. The book is filled with these physical memories, which provide context and insight to the premier “college rock” band of the 1980s."—Columbia Missourian

"Sullivan’s entertaining book, published by University of Minnesota Press, is a glorified tour diary full of sex, drugs, rock ’n’ roll, more drugs, and a story about Replacements guitarist Bob Stinson defecating in an ice bucket and sending it down a hotel’s dumbwaiter."—Boston Globe