The Young Colonists: A Story of the Zulu and Boer Wars (Paperback) 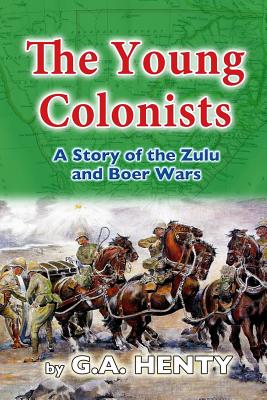 The Young Colonists: A Story of the Zulu and Boer Wars (Paperback)


Not On Our Shelves—Ships in 1-5 Days
(This book cannot be returned.)
The late 1800s saw the imperialistic Scramble for Africa, in which European nations vied for control of regions of Africa. The efforts of the British to secure the southern tip of the continent led them into unfortunate wars with the Zulu and the Boers (descendants of Dutch farmers). In G.A. Henty's The Young Colonists: A Story of the Zulu and Boer Wars, the Humphreys family moves from Derbyshire in England to the Transvaal in South Africa in the hope that a change of climate will be good for the mother's health. Young Dick Humphreys and his friend Tom Jackson find that being colonists came with great risk. Join Dick and Tom as they seek to protect their family and fellow colonists as they vie for control with the Zulus and Boers. Alacrity Press is proud to reprint Henty's 1885 classic, The Young Colonists. The story is set in 19th century England and southern Africa.
G.A. Henty (1832-1902) was a prolific author and journalist in the 19th century. Drawing on his experience and knowledge as a war correspondent, Henty was a master of weaving history into his fictional stories about courageous young men living in difficult times marked by military conflict. His stories provide insight into some of the greatest conflicts of history while introducing the reader to characters that embodied the values of integrity, duty and virtue. While aimed at older children and teens, even adults will enjoy his writings.