Why is it So Hard to Go Back to the Moon? (Paperback) 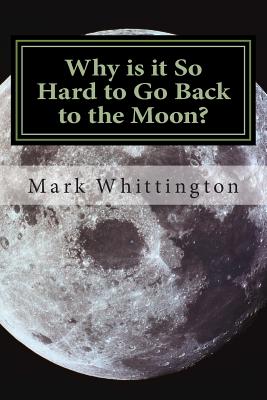 Why is it So Hard to Go Back to the Moon? (Paperback)


Not On Our Shelves—Ships in 1-5 Days
(This book cannot be returned.)
Gene Cernan, the last man to walk on the moon, departed from the lunar surface on December 14, 1972. The last words he spoke, officially, were, "And, as we leave the Moon at Taurus-Littrow, we leave as we came and, God willing, as we shall return: with peace and hope for all mankind. Godspeed the crew of Apollo 17." Decades later, despite the efforts of two American presidents, human beings have not returned to the moon. Why Earth's nearest neighbor remains untouched by human footsteps after so long remains one of the vexing questions of modern times. Mark R. Whittington, the author of the Children of Apollo trilogy and The Last Moonwalker and Other Stories, attempts to answer this question in his new long essay Why is it so Hard to Go Back to the Moon? The answer involves failures of leadership of multiple American presidents as well as political intrigue and backstabbing that shortened the Apollo program and left two return to the Moon programs stillborn. More important, Whittington seeks to set out a political blue print, learning from mistakes of the past, for setting course back to the Moon. Why is it so Hard to Go Back to the Moon is not a typical future in space book. The author does not delve into technical designs for lunar voyages. Instead he looks at the much harder than rocket science art of politics in relation to returning to the Moon. Why is it so Hard to Go Back to the Moon? is a must read for anyone interested in influencing future space policy or who are just interested in learning about the intersection between space exploration and politics.
Mark R. Whittington is a writer and computer analyst residing in Houston, Texas. He is the author of numerous works of fiction and nonfiction, including the novel of suspense Nocturne which he coauthored with his wife, Chantal, The Last Moonwalker and Other Stories, Gabriella's War, and The Man from Mars: The Asteroid Mining Caper. In his time he has ridden a camel in the shadow of the Great Pyramid, floated down the Grand Canal of Venice and down a Norwegian fjord, walked in the footsteps of Shakespeare and Churchill, and has witnessed people rocketing into space. One of his ambitions is to see with his own eyes Earth rising above the horizon of the Moon.