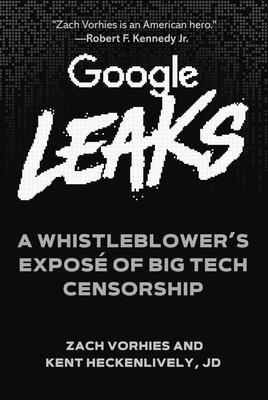 The madness of Google's attempt to mold our reality into a version dictated by their corporate values has never been portrayed better than in this chilling account by Google whistleblower, Zach Vorhies. As a senior engineer at Zach watched in horror from the inside as the 2016 election of Donald Trump drove Google into a frenzy of censorship and political manipulation. The American ideal of an honest, hard-fought battle of ideas—when the contest is over, shaking hands and working together to solve problems—was replaced by a different, darker ethic alien to this country's history as wave after of censorship destroyed free speech and entire market sectors.

Working with New York Times bestselling author Kent Heckenlively (Plague of Corruption), Vorhies and Heckenlively weave a tale of a tech industry once beloved by its central figure for its innovation and original thinking, turned into a terrifying “woke-church” of censorship and political intolerance. For Zach, an intuitive counter-thinker, brought up on the dystopian futures of George Orwell, Aldous Huxley, and Ray Bradbury, it was clear that Google was attempting nothing less than a seamless rewriting of the operating code of reality in which many would not be allowed to participate.

Using Google's own internal search engine, Zach discovered their real "AI-Censorship" system called “Machine Learning Fairness,” which he claims is a merging of critical race theory and AI that was secretly released on their users of search, news and YouTube. He collected and released 950 pages of these documents to the Department of Justice and to the public in the summer of 2019 through Project Veritas with James O'Keefe, which quickly became their most popular whistleblower story, which started a trend of big whistleblowing.

From Google re-writing their news algorithms to target Trump to using human tragedy emergencies to inject permanent blacklists, Zach and Kent provide a “you are there” perspective on how Google turned to the dark side to seize power. They finish by laying out a solution to fight censorship. Read this book if you care to know how Google tries to manipulate, censor, and downrank the voice of its users.
Zach Vorhies was an engineer at Google and YouTube for eight and a half years, eventually attaining the rank of senior engineer. Some of his projects involved utilizing the Google Earth system for driving directions, as well as the YouTube interface of the PS4 game platform. You can find more information about Zach at his website, www.zachvorhies.com.

Kent Heckenlively, JD, is an attorney, science teacher, and New York Times bestselling author. He lives in Northern California with his wife, Linda, and they have two children, Jacqueline and Ben.

"A powerful case against Google that deserves readers’ attention."
—KIRKUS

“When Zach Vorhies went public with facts about Google’s chilling influence on the world’s information landscape, he was attacked, targeted, and smeared by the same machine he exposed. Don’t pass up the chance to learn what he knows.”
—SHARYL ATTKISSON, investigative correspondent

“You, sir, you are an American Hero.”
—DONALD TRUMP, October 2020 at the Trump Doral

“We owe Zach Vorhies and his coauthor Kent a debt of gratitude. He risked it all to reveal the truth. When all is said and done, humanity will remember those who told them the truth.”
—TIFFANY FITZHENRY, writer and producer

“I know a lot of creepy things about Google, but I was shocked by some of the revelations that turned up in the 950 pages of documents Vorhies extracted from the company. We all need to understand how dangerous this company is.”
—DR. ROBERT EPSTEIN, Big Tech researcher and former editor-in-chief of Psychology Today

“Few realize the risk that comes with exposing the communist nation that is Google. Zach Vorhies and Kent Heckenlively have laid their lives on the line to pull back the curtain on the technocratic overlords of the world’s most powerful monopoly.”
—MIKKI WILLIS, filmmaker

“Were it not for the information provided by Zach, we would not have exposed the way that companies like Google are attempting to manipulate reality. Instead of simply going with the flow, Zach did the right thing by blowing the whistle and for that we owe him a debt.”
—CASSANDRA SPENCER, journalist, Project Veritas