Slovenian Cuisine: From the Alps to the Adriatic in 20 Ingredients (Hardcover) 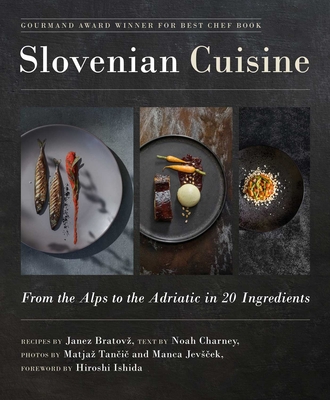 Slovenian Cuisine: From the Alps to the Adriatic in 20 Ingredients (Hardcover)


Not On Our Shelves—Ships in 1-5 Days
Winner of the Gourmand Award for Best Chef Book; a love-letter to the region, by the internationally-renowned chef and father of modern Slovenian cuisine.

First published in Slovenian in 2018, this long-awaited, award-winning book has finally been translated to English. With beautifully written introductory essays for each new stop and robust narrative elements, it follows a road trip around Slovenia in search of the finest ingredients in the country, and the best producers of them. Each chapter profiles an ingredient key to the culture, and the passionate producer or farmer who supplies it, before delving into two select recipes for each—one interpretation of a traditional Slovenian dish and one modern presentation—which highlight the product and showcase its versatility.

The reason for this format is simple. For JB, the ingredient is paramount—the source of inspiration. Every dish in his restaurant is created from completely fresh ingredients, which he always hand selects and likes to trace back to their source. So it is only natural that his cookbook would be organized in the same way. It’s very much a reflection of the chef himself: an innovator rooted in local tradition and ingredients.

Fellow Slovenian Ana Roš (named the best female chef in the world in 2017) told CNN: “Every country has 'The Chef.' In Slovenia, this is him. Chef Janez Bratovž is the father of modern Slovenian cuisine.” With the country being awarded the title of European Region of Gastronomy in 2021, it’s clear that Slovenia and its beautiful and diverse cuisine is fast becoming the next major culinary destination, and its time in the spotlight is overdue.

Janez Bratovž (JB) is known as the father of modern Slovenian cuisine, and is an internationally-renowned chef. JB is the chef and owner of his eponymous restaurant in Ljubljana, which was the first Slovenian restaurant to rank in the World’s 100 Best, and has ranked as high as number 10 in Europe on The Daily Meal’s list. It is also regularly in San Pellegrino’s list of the top 100 in the world.​ JB has also appeared at the El Bulli Foundation and been invited to cook a meal at the Vatican.

Noah Charney is an internationally bestselling author and professor of art history. An American, he has lived for many years in Slovenia. He is the author of twelve books and writes regularly for the Guardian, the Washington Post, Salon, the Observer, Fine Dining Lovers, and many other top magazines and newspapers.

Matjaž Tančič is a Slovenian photographer, who lives and creates between Beijing and Ljubljana. He began his path as a photojournalist for Mladina magazine, but quickly made his way abroad. A graduate of the London College of Fashion, Matjaž has 68 group and 28 solo exhibitions behind him, with his work being featured in magazines such as National Geographic, Vogue, Playboy, Elle, Tatler, Marie Claire, and many others. He has won a Sony World Photography Organization contest, as well as a Slovenia Press Photo award.

Manca Jevšček is a veteran food photographer, working throughout central Europe, and with numerous cookbooks to her name. Her most recent include the cookbook for the Bazilika Bistro in Ljubljana, and a monograph on apple cider vinegar.
"Slovenian Cuisine by Janez Bratovž features dishes from his acclaimed restaurant JB in Ljubljana, and profiles of his favorite producers across Slovenia. The photographs by Manca Jevšček and Matjaž Tančič range from lush landscapes and sensitive portraits, to strikingly modern plates of food. The designers Žare Kerin and Marjan Božič make generous use of space on each page, giving type and image ample room to breathe on white and light gray fields. Their typography is unique, conforming to a flexible grid that breaks in unexpected places. Especially remarkable is the way Kerin and Božic artfully set type in slender columns or wide blocks, mirroring the photographs on each spread. Quietly gorgeous, this book is an inspiring visual journey through the Slovenian countryside and its culinary gifts."
—Stained Page News