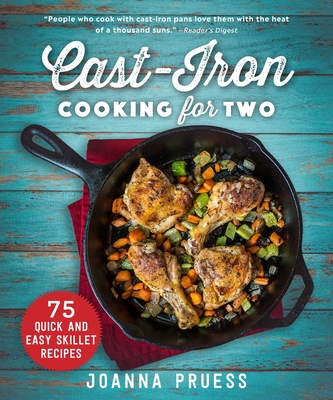 
Not On Our Shelves—Ships in 1-5 Days
Small-batch, one-pot dishes to share with close friends and family!

In Cast‑Iron Cooking for Two, Joanna Pruess celebrates the enduring appeal of cast‑iron cooking and the countless twosomes who love sharing home‑cooked food. Her 75 easy and flavorful recipes feature versatile cast‑iron skillets that are the right size for people cooking for two (or three), whether they be empty nesters, college students, or just anyone who is not feeding a group.

You’ll find plenty of dishes that are perfect for any occasion when it’s just the two of youؙ—or maybe even a few of you! Date night, Sunday morning with a couple of kids, or a casual drop-in dinner for a close friend. Real ingredients that are easily accessible, along with a smattering of high-quality convenience foods (think prepared pesto, pumpkin pie spice mix), help the home cook save time, money, and cupboard and counter space.

Home cooks are discovering the cast‑iron pan, popular for centuries, as a tool for economical, easy, elemental ways to cook. Pruess includes a section about caring for pans and debunking some commonly held myths about cooking with cast‑iron.

Joanna invites the cook to get creative, mix and match, and buck tradition: Buckwheat Crêpes with Smoked Salmon can be served for breakfast, brunch, or even dinner. Blackberry Candied Ginger Crisp could even become a celebratory breakfast instead of a dessert. And some of the side dishes, such as Roasted Corn Pancakes with Cherry Tomato Salsa and Sweet Potato Pancakes with Brussels Sprouts Slaw, could be the center of a light dinner or lunch.

There’s something for everyone—and their closest friends and family—in Pruess’s latest, Cast-Iron Cooking for Two.

Joanna Pruess is an award-winning author whose cooking articles and recipes have appeared in the New York Times Sunday Magazine, the Washington Post, Food Arts, Saveur, Food & Wine, and the Associated Press syndicate. Her cookbooks include The Cast-Iron Cookbook and Soup for Two. She resides in New York City.
"If you've ever longingly eyed a recipe but had to pass it up because it served a small army or used a small army's kitchen's worth of pans, bow down to Joanna Pruess. She has created a book of delicious, just-right-for-two dishes that use basically one pan. Your copy will be dog-eared in no time." —David Leite, publisher of the James Beard Award-winning website Leite's Culinaria  (LCcooks.com)

"Joanna Pruess’s Cast-Iron Cooking for Two is a magical work. With her easy, accessible, and delicious recipes for two, Joanna encourages cooks to share the magic that is cast-iron cooking at its best, even for small gatherings." —Mark Kelly, public relations manager, Lodge Cast Iron

“A lovely book and full of wonderful ideas. I can think of dedicated cooks wanting to try one a week, if not more often. I’m cooking my way through the book.” —Nancy Harmon Jenkins, author of The Four Seasons of Pasta