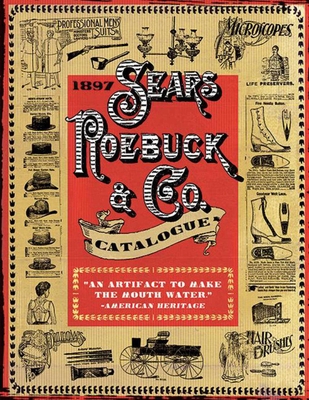 
Not On Our Shelves—Ships in 1-5 Days
They were Amazon and Walmart combined—the one place to shop for Americans who needed everything—clothes, furniture, tools, jewelry, musical instruments, books, and more!

Imagine it’s the end of the nineteenth century, and, with one catalog, you can buy everything from beds and tools to clothing and opium. (Yes, opium.) Not to mention ear trumpets, horse buggies, and Bibles. For every recognizable item included in the 1897 Sears, Roebuck & Co. Catalogue, plenty of others are guaranteed to confuse or interest 21st century readers—like Bust Cream or Food and Sweet Spirits of Nitre. What was once standard household fare is today a sometimes strange, often funny look at what life was once like for the average American family.

Sears, Roebuck & Co. has defined and innovated American retail for years. As the company grew from humble beginnings, its catalog selection exploded to include all sorts of categories and encompassed almost everything imaginable; eventually you could actually buy a house right along with everything you needed to furnish it. Flipping through the pages of seemingly endless items, huge and small, readers will find it impossible not to marvel at such early American ingenuity and determination to allow people in the farthest reaches of a still-growing nation to purchase and receive all the necessities of life and the comforts of home.

For antique collectors, historians, costumers, set designers, and anyone just interested in the everyday components of life back in 1897, this facsimile is as entertaining as it is educational.
Sears, Roebuck & Co. was founded in 1886 in Chicago, Illinois. It published a general merchandise mail order catalog and consumer guide from 1888 until 1993. It is the author of the 1908 Sears, Roebuck & Co. Catalogue.