Lies, Half-Truths, and More Lies: The Truth Behind 250 "Facts" You Learned in School (and Elsewhere) (Paperback) 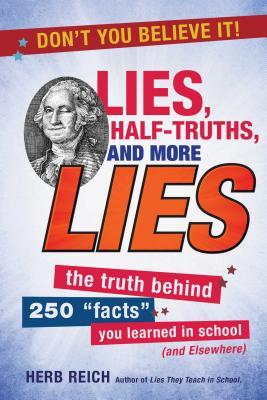 Lies, Half-Truths, and More Lies: The Truth Behind 250 "Facts" You Learned in School (and Elsewhere) (Paperback)


Special Order—Subject to Availability
History is replete with stories of great people and extraordinary events that either never happened or didn’t happen the way we were told they did. Such news or embellishment thereof are part of what we consider common knowledge – information taught in schools and passed down to us. And they are wrong. How about these gems:


Lies, Lies, and More Lies is a humorous, witty, and charming collection of anecdotes surrounding history, pop culture, and more. It is a book that will have readers questioning what they’ve learned or been told and, for these 250 facts anyway, the book advises you: Don’t You Believe It!
Herb W. Reich has worked a lifetime in publishing. He spent 15 years as senior acquisitions editor at John Wiley & Sons. Before that, he administered the behavioral science publishing program at Basic Books and served as editorial director of the Macmillan Book Clubs. He is the author of the Skyhorse title Lies They Teach in School. He edited The Odyssey Scientific Library, contributed to The Random House Dictionary of the English Language and the Corsini Encyclopedia of Psychology, and spent two years as a staff writer with NBC-TV.