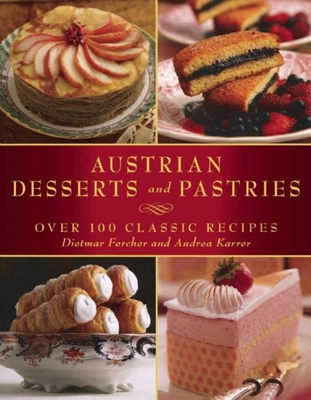 
Not On Our Shelves—Ships in 1-5 Days
Recreate the romantic Viennese café-patisserie with delectable variations of strudels, tortes, cookies, parfaits, and more.

Delve into the history behind each scrumptious dessert, enjoy personal anecdotes from the chef, learn baking tips that show you how to make different types of dough from scratch, and make use of recipes for basic sauces, creams, and cake bases. Channel your inner Viennese chef and whip up traditional desserts with a modern twist, such as rhubarb strudel with almond sauce, bilberry cookies, strawberry cream schnitten, topfen cream torte, plum parfait, and pistachio roulade. These sophisticated and diverse desserts, which are divided into warm and cold offerings, will satisfy any palate.

Skyhorse Publishing, along with our Good Books and Arcade imprints, is proud to publish a broad range of cookbooks, including books on juicing, grilling, baking, frying, home brewing and winemaking, slow cookers, and cast iron cooking. We’ve been successful with books on gluten-free cooking, vegetarian and vegan cooking, paleo, raw foods, and more. Our list includes French cooking, Swedish cooking, Austrian and German cooking, Cajun cooking, as well as books on jerky, canning and preserving, peanut butter, meatballs, oil and vinegar, bone broth, and more. While not every title we publish becomes a New York Times bestseller or a national bestseller, we are committed to books on subjects that are sometimes overlooked and to authors whose work might not otherwise find a home.
Dietmar Fercher learned his trade in Spittal an der Drau and worked as the master confectioner at the Kurkonditorei Oberlaa and as head patissier for the Hilton hotels in Vienna and Düsseldorf, as well as for the Imperial hotels. His café-patisserie, which he has owned for more than twenty years, has won the Golden Coffeebean award. He lives in Vienna, Austria.

Andrea Karrer, born in 1963, is a versatile ambassador of Austrian culinary traditions. She has a weekly radio show, writes newspaper columns, works with Austrian chef Christian Petz, appears on TV, and writes wonderfully tempting cookbooks. She lives in Vienna, Austria.

Konrad Limbeck, born in 1974 in Upper Bavaria, has felt drawn to culinary delights since his childhood. He is a professional photographer and works for a number of lifestyle magazines. Limbeck lives in Vienna, Austria.