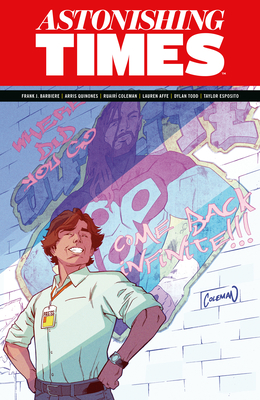 
Coming Soon—Pre-Order Now
A modern superhero story that celebrates the genre and redefines heroes for a new generation.

In a world where superheroes are common place, Noah Sans, a young reporter trying to live up to the legacy of his father, investigates a mystery involving missing superheroes that quickly turns into a thrilling conspiracy.

Noah Sans, a young reporter living in the shadow of his father, lives in a world full of superheroes—but no one seems to care. After a world changing event called The Cataclysm, people moved on, and now heroes are old news. But when Noah begins investigating a mysterious murder, he comes face to face with his most revered heroes and is forced to confront a secret past that could change the world forever.

Astonishing Times is a love letter to the medium of comics and a celebration of superheroes old and new. Award-winning writer Frank J. Barbiere returns to creator-owned comics alongside Arris Quinones, host of YouTube's Variant, to craft a modern classic that redefines superheroes for a new era with stunning art by Ruairí Coleman and color artist Lauren Affe. Together, the team hopes to inspire a new generation of fans young and old, and remind us all that heroes are everywhere.

Arris Quinones is the host and co-creator of Variant Comics, a YouTube channel known as the grandfather of comic channels with over 2 million subscribers and 6 million monthly views. He makes his comics writing debut with Astonishing Times.