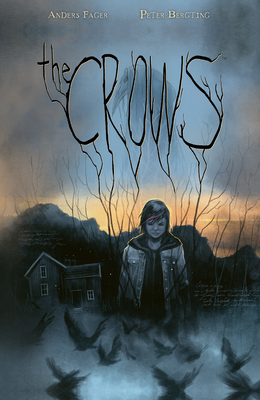 
When Kim inherits an old family house in rural Sweden, there are notes posted everywhere. On the walls, the doors, even the ceiling. Reminders. And drawings. Of the monsters that still haunt this house and the land on which it sits. But the monsters aren’t just outside; they’re in Kim’s head, in the traumatic memories of an upbringing as different, other, alone. Dive into this stunning graphic novel full of darkness, reconciliation, and exploration of the self. From acclaimed creators Anders Fager and Peter Bergting.
Anders Fager is a Swedish game designer and horror writer.
Born in Stockholm, eighteen year old Fager joined Äventyrspel in 1982 to travel around the country demonstrating Sweden's first role-playing game, Drakar & Demoner, a game that at the time was compared to "improvised radio theatre". Fager wrote Spindelkonungens pyramid, the first role-playing game adventure published in Swedish. He also co-designed board games for the Äventyrsspel label, such as Lützen and Monstret som slukade Stockholm.

After among other things an army career, Fager made his debut as a writer in 2009 with the short story collection Swedish Cults (Svenska kulter) that received a most favourable review in Swedish newspaper Dagens Nyheter and launched Fager's career as full-time writer. Fager writes modern urban horror in a style he has repeatedly described as ”what would happen if James Ellroy took on H.P. Lovecraft”. Set in present-day Sweden, his interconnected stories form a modern part of the Cthulhu mythos with entities such as Dagon, Hastur and Nyarlathotep making appearances. Fager's fictional world, known as "The Cult's World", has been made into a role playing game and a graphic novel and his stories are currently being worked into the swedish edition of role playing game Call of Cthulhu. Fager has also been published in Finland, Italy and France.

In the 2010s he has written role-playing supplements for such games as Kult, Twilight: 2000, Call of Cthulhu Tales from the Loop and the new release of Chock, originally a Swedish translation of the RPG Chill. In 2020 his short story "Backstairs" was published by US publisher Valancourt Books. In early 2021 it was announced that Fager and artist Peter Bergting's graphic novel "The Crows" would be published by Dark Horse Comics.