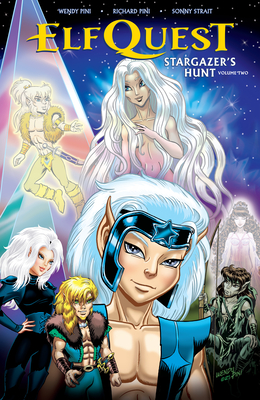 
Not On Our Shelves—Ships in 1-5 Days
The adventure of ElfQuest: Stargazer’s Hunt concludes!

Skywise, astronomer and sky-reader to the Wolfrider tribe of elves, has gone missing from the Starhome since the death of his brother-in-all-but-blood, Cutter Kinseeker. Literally lost in space, he desperately seeks the reason for the haunting gaps in his memories. His star-spanning quest reveals interstellar majesty and the desolation of ruined worlds, but no answers. Meanwhile Jink, the elf-daughter he left behind, returns to the World of Two Moons, ancestral home of the Wolfriders, in the hope of finding a way to heal Skywise’s soul. Who she discovers there (we’ve met them before) will help propel the saga to its heartwrenching, triumphant finish.

Stargazer’s Hunt has story by ElfQuest co-creators Wendy and Richard Pini, with script and layouts by Wendy Pini. Veteran Elfquest alumnus Sonny Strait continues at warp speed as the artist and colorist for the new series.
Wendy Pini was born Wendy Fletcher in San Francisco. Growing up on an isolated ranch in Gilroy, California, Wendy's imagination was fueled by all forms of fantasy and mythology. At an early age she began spinning her own tales of elves, monkey-gods, aliens and sorcerers. While her artistic talents were influenced by of turn-of-the-century illustrators, film and TV animation, her storytelling abilities evolved from a love of Shakespeare, Japanese history and legend, modern fantasy and the epic poetry of the Ramayana. In 1977, a deeply personal project called ELFQUEST was born. As the first continuing fantasy/adventure graphic novel series in America to be co-created, written and illustrated by a woman, ELFQUEST became a phenomenon in the comics industry. Appealing to comics and sci-fi/fantasy fans alike, it attracted a unique and unprecedented audience, an equal mix of male and female readers. Over three million copies of the collected graphic novel volumes have been sold to date. In 2014 Dark Horse Comics will begin publishing Elfquest: The Final Quest in comic book format.

Richard Pini is one half of the husband-and-wife team responsible for creating the well-known Elfquest series of comics, graphic novels, and prose works.
“ElfQuest: Stargazer's Hunt is going to sink its hooks deep into ElfQuest fans in the best possible ways.”–ComicBook.com