#ChurchToo: How Purity Culture Upholds Abuse and How to Find Healing (Paperback) 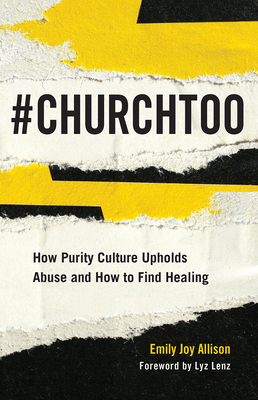 #ChurchToo: How Purity Culture Upholds Abuse and How to Find Healing (Paperback)

When Emily Joy Allison outed her abuser on Twitter, she launched #ChurchToo, a movement to expose the culture of sexual abuse and assault utterly rampant in Christian churches in America. Not a single denomination is unaffected. And the reasons are somewhat different than those you might find in the #MeToo stories coming out of Hollywood or Washington. While patriarchy and misogyny are problems everywhere, they take on a particularly pernicious form in Christian churches where those with power have been insisting, since many decades before #MeToo, that this sexually dysfunctional environment is, in fact, exactly how God wants it to be.

#ChurchToo turns over the rocks of the church's sexual dysfunction, revealing just what makes sexualized violence in religious contexts both ubiquitous and uniquely traumatizing. It also lays the groundwork for not one but many paths of healing from a religious culture of sexual shame, secrecy, and control, and for survivors of abuse to live full, free, healthy lives.