The Holy Sacrifice of the Mass: The Mystery of Christ's Love (Paperback) 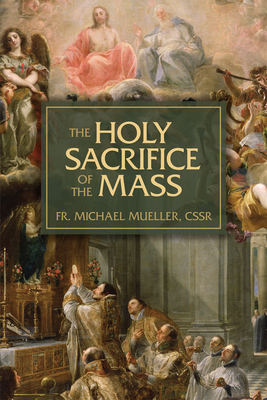 The Holy Sacrifice of the Mass: The Mystery of Christ's Love (Paperback)


Not On Our Shelves—Ships in 1-5 Days
Few Catholics have anywhere near an adequate appreciation for the glory and splendors of the Holy Sacrifice of the Mass--the central aspect of our Holy Faith. Fr. Michael Mueller's famous masterpiece on this glorious subject will come as a magnificent and direly needed revelation to many Catholic souls. Father Mueller joins a wealth of Catholic traditions, biblical facts, and enthralling true stories from Catholic history and the lives of the saints to show that in the Holy Sacrifice of the Mass, we possess something of infinite value: the only gift we can offer to Almighty God which is not miserably unworthy of Him and through which we can obtain from God every possible favor. The Catholic Church is the only home for our dear Savior. The Catholic Church is the only place on earth that has a true and holy spirit of sacrifice worthy of offering to God. The Catholic Church is the only place where we can receive the full splendors of grace through the Holy Sacrifice of the Mass. Eternity will not be too long for us to regret missing a single Mass, and the reader will be given scores of reasons to convince him that every transient sacrifice pales in comparison with the bounty received from participating just once in the eternal Sacrifice. The reader of The Holy Sacrifice of the Mass will soon come to realize that the Mass is an inexhaustible mine of graces, the source of all favors from God, and absolutely the thing of greatest value in the entire universe.

Michael Mueller was born in Germany on December 18th, 1825. Zealous at a young age for the salvation of souls, he joined the Redemptorists and was selected to further apostolic works in the mission territory of the United States of America. He was ordained at the age of 27 by St. John Neumann, and exercised his priesthood in a variety of capacities throughout the 1850s. Eager to cultivate the faith further, since he was not a gifted preacher, Fr. Mueller sought to win souls over by his writing, explaining the essentials of Catholicism, promoting authentic spirituality, and defending the faith against the attacks of Modernism. Beginning in the 1860s and continuing all the way until his death in 1899, Fr. Mueller wrote prolifically to make Catholicism and the Redemptorists better known in the United States, making him one of the better known Catholic theologians in America in the 19th century. Of the more than 30 works that he wrote, some of Fr. Mueller's best are: Prayer: The Key to Salvation, The Blessed Eucharist: Our Greatest Treasure, The Holy Sacrifice of the Mass, Familiar Explanation of Christian Doctrine, and God, the Teacher of Mankind.