Psychological Roots of the Climate Crisis: Neoliberal Exceptionalism and the Culture of Uncare (Psychoanalytic Horizons) (Paperback) 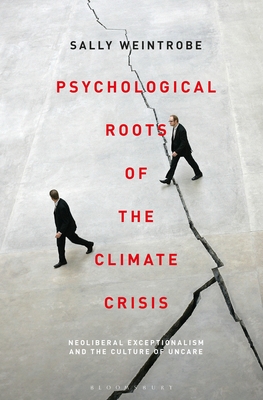 Psychological Roots of the Climate Crisis: Neoliberal Exceptionalism and the Culture of Uncare (Psychoanalytic Horizons) (Paperback)

Psychological Roots of the Climate Crisis tells the story of a fundamental fight between a caring and an uncaring imagination. It helps us to recognise the uncaring imagination in politics, in culture - for example in the writings of Ayn Rand - and also in ourselves.

Sally Weintrobe argues that achieving the shift to greater care requires us to stop colluding with Exceptionalism, the rigid psychological mindset largely responsible for the climate crisis. People in this mindset believe that they are entitled to have the lion's share and that they can 'rearrange' reality with magical omnipotent thinking whenever reality limits these felt entitlements. While this book's subject is grim, its tone is reflective, ironic, light and at times humorous. It is free of jargon, and full of examples from history, culture, literature, poetry, everyday life and the author's experience as a psychoanalyst, and a professional life that has been dedicated to helping people to face difficult truths.
Sally Weintrobe is a Fellow of The British Psychoanalytical Society, a founder member of the Climate Psychology Alliance and she Chairs the International Psychoanalytic Association's (IPA's) Committee on Climate. In 2021 she won an award from the IPA for her work on climate. Her past publications include, as editor and contributor, Engaging with Climate Change, short-listed in 2014 for the International Gradiva Prize for contributions to psychoanalysis.