The Ever After: A Novel (Hardcover) 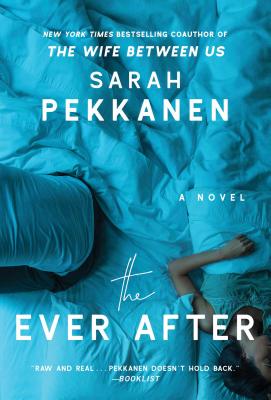 The Ever After: A Novel (Hardcover)

“In her signature conversational style, Pekkanen uncovers the truth behind the lies as Josie comes to grips with reality vs. the mirage of her marriage.” —Library Journal (starred review)

In this intricate and enthralling domestic drama, perfect for fans of Big Little Lies and The Affair, the internationally bestselling author of the “gossipy page-turner” (Glamour) The Perfect Neighbors goes deep into a marriage in crisis, peeling back layers of secrets to discover where the relationship veered off course—and whether it is worth saving.

Josie and Frank Moore are happy…at least Josie thinks they are. As parents of two young girls in the Chicago suburbs, their days can be both busy and monotonous, and sometimes Josie wonders how she became a harried fortysomething mother rather than the driven career woman she once was. But Frank is a phenomenal father, he’s handsome and charismatic, and he still looks at his wife like she’s the beautiful woman he married more than a decade ago. Josie isn’t just happy—she’s lucky.

Until one Saturday morning when Josie borrows her husband’s phone to make a quick call—and sees nine words that shatter her world.

Now Josie feels as if she is standing at the edge of a sharp precipice. As she looks back at pivotal moments in the relationship she believed would last forever, she is also plunging ahead, surprising everyone (especially herself) with how far she will go to uncover the extent of her husband’s devastating secret.

With her “conversational writing style and a knack for making readers care about her characters” (The Washington Post) bestselling author Sarah Pekkanen paints a vivid, kaleidoscopic portrait of a marriage before and during a crisis—and of a woman who fears that the biggest secret of all may be the one she’s hiding from herself.
Sarah Pekkanen is the bestselling author of The Ever After, The Opposite of Me, Skipping a Beat, These Girls, The Best of Us, Catching Air, Things You Won’t Say, and The Perfect Neighbors. Her work has been published in People, The Washington Post, and USA TODAY, among other publications. She lives with her family in Chevy Chase, Maryland.
Praise for The Ever After:

“In her signature conversational style, Pekkanen uncovers the truth behind the lies as Josie comes to grips with reality vs. the mirage of her marriage. A weighty, emotional read with the author's trademark relatable, realistic characters. Pekkanen fans will clamor for this one.”
— Library Journal (starred review)

"Pekkanen lets readers experience the full emotional scope of Josie’s devastation, from the tumultuous discovery of infidelity, to the rehashing of small memories given new weight, to the shaky attempts to rebuild and repair. Writing with rawness and realism, Pekkanen doesn’t hold back from showing Josie’s answer, confusion, and hurt. Fans of Liane Moriarty, Anne Tyler, and Pekkanen’s previous books will appreciate the story’s depth."
— Booklist

"Pekkanen excels at capturing the intimate details of family life and the insidiousness of domestic ennui."
— Publishers Weekly

“A genuine and raw look into the aftermath of what happens to one family after it’s shaken by an affair… The Ever After pulls at the heart and reveals the characters’ inner layers of emotion in a way that captivates.”
— RT Magazine

"A compelling domestic drama that will take you on a serious ride.”
— Hello Giggles