12 Strong: The Declassified True Story of the Horse Soldiers (Paperback) 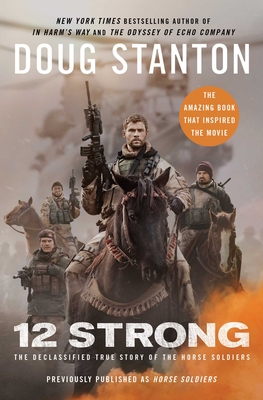 12 Strong: The Declassified True Story of the Horse Soldiers (Paperback)

Previously published as Horse Soldiers, 12 Strong is the dramatic account of a small band of Special Forces soldiers who secretly entered Afghanistan following 9/11 and rode to war on horses against the Taliban. Outnumbered forty to one, they pursued the enemy army across the mountainous Afghanistan terrain and, after a series of intense battles, captured the city of Mazar-i-Sharif. The bone-weary American soldiers were welcomed as liberators as they rode into the city. Then the action took a wholly unexpected turn.

During a surrender of six hundred Taliban troops, the Horse Soldiers were ambushed by the would-be POWs. Dangerously overpowered, they fought for their lives in the city’s immense fortress, Qala-i-Janghi, or the House of War. At risk were the military gains of the entire campaign: if the soldiers perished or were captured, the entire effort to outmaneuver the Taliban was likely doomed.

“A riveting story of the brave and resourceful American warriors who rode into Afghanistan after 9/11 and waged war against Al Qaeda” (Tom Brokaw), Doug Stanton’s account touches the mythic. The soldiers on horses combined ancient strategies of cavalry warfare with twenty-first-century aerial bombardment technology to perform a seemingly impossible feat. Moreover, their careful effort to win the hearts of local townspeople proved a valuable lesson for America’s ongoing efforts in Afghanistan. With “spellbinding...action packed prose...The book reads more like a novel than a military history...the Horse Soldier’s secret mission remains the US military’s finest moment in what has since arguably been a muddled war” (USA TODAY).
Doug Stanton is the author of the New York Times bestsellers In Harm’s Way: The Sinking of the USS Indianapolis and the Extraordinary Story of Its Survivors and Horse Soldiers: The Extraordinary Story of a Band of US Soldiers Who Rode to Victory in Afghanistan, which is the basis for a Jerry Bruckheimer–produced movie by the same name, starring Chris Hemsworth and Michael Shannon, to be released by Warner Bros. in 2018. He attended Hampshire College and the University of Iowa Writers’ Workshop. His writing has appeared in The New York Times, The New York Times Book Review, Time, The Washington Post, Men’s Journal, The Daily Beast, Newsweek, Esquire, and Outside, where he has been a contributing editor. Stanton is a founder of the National Writers Series, a year-round book festival, and lives in his hometown of Traverse City, Michigan, with his wife, Anne Stanton, and their three children, John, Katherine, and Will.
“A fascinating account…This is not just a battle story—it’s also about the home front. An important book.” –The Today Show

"Doug Stanton's Horse Soldiers is as gripping as the most intricately plotted thriller. It is a masterwork of stunning military action, brilliant in-depth journalism, and powerful storytelling. Finally Americans can know how just a few dozen courageous U.S. soldiers beat the Taliban under the most extreme and dangerous conditions imaginable. I could not put this book down." -- Vince Flynn

"Horse Soldiers is a great read -- a riveting story of the brave and resourceful American warriors who rode into Afghanistan after 9/11 and waged war against Al Qaeda. We're hearing many of these stories for the first time -- and from those who waged a war worthy of Rudyard Kipling, James Bond, and Davy Crockett." -- Tom Brokaw

"Doug Stanton's Horse Soldiers is the story of the first large American unconventional warfare operation since World War II. My Green Berets were launched deep into enemy territory to befriend, recruit, equip, advise, and lead their Afghan counterparts to attack the Taliban. The Horse Soldiers succeeded brilliantly with a highly decentralized campaign, reinforced with modern airpower's precision weapons, forcing the Taliban government's collapse in a few months. Doug Stanton captures the gritty realities of the campaign as no other can." -- Geoffrey C. Lambert, major general (retired), U.S. Army, and commanding general of the U.S. Army Special Forces Command (Airborne), 2001-2003

"Not just an epic war story, Horse Soldiers is a beautifully written, intimate portrait of the men and women who lived the battle on the fields of fire -- and at home, too. Their secret mission against the Taliban was intelligent, brave, and undertaken with great care for the good people of Afghanistan. Doug Stanton's superb account is an invaluable insight for policy makers and the public for years to come." -- Greg Mortenson, author of Three Cups of Tea

"In the spirit of Black Hawk Down and Flags of Our Fathers, Doug Stanton plunges into the heart of a single mission and returns with a stark understanding not only of what happened but what was truly at stake. Through precise reportage and hauntingly rendered battle scenes, Stanton shows that we may ignore this 'forgotten' theater only at our own peril." -- Hampton Sides, author of Ghost Soldiers and Blood and Thunder

"Spellbinding...action packed prose. [Stanton's] gritty narrative is thoroughly researched and the details of military operations jarringly precise...The book reads more like a novel than a military history...the Horse Soldier's secret mission remains the U.S. military's finest moment in what has since arguably been a muddled war." -- USA Today

"Stanton packs a huge amount of research into a thrilling action-ride of a book... deserves a hallowed place in American military history...." -- Bruce Barcott, cover of The New York Times Book Review

"Horse Soldiers reads like a cross between an old-fashioned Western and a modern spy thriller." -- Parade Magazine

"Stanton has captured the inner workings of... Special Forces operations. A thorough recounting of the events told from the soldiers' point of view." -- Veritas, Journal of Special Operations History