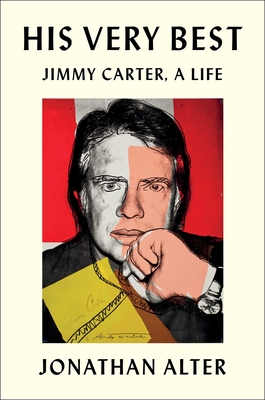 
Not On Our Shelves—Ships in 1-5 Days
From one of America’s most-respected journalists and modern historians comes the first full-length biography of Jimmy Carter, the thirty-ninth president of the United States and Nobel Prize–winning humanitarian.

Jonathan Alter tells the epic story of an enigmatic man of faith and his improbable journey from barefoot boy to global icon. Alter paints an intimate and surprising portrait of the only president since Thomas Jefferson who can fairly be called a Renaissance Man, a complex figure—ridiculed and later revered—with a piercing intelligence, prickly intensity, and biting wit beneath the patented smile. Here is a moral exemplar for our times, a flawed but underrated president of decency and vision who was committed to telling the truth to the American people.

Growing up in one of the meanest counties in the Jim Crow South, Carter is the only American president who essentially lived in three centuries: his early life on the farm in the 1920s without electricity or running water might as well have been in the nineteenth; his presidency put him at the center of major events in the twentieth; and his efforts on conflict resolution and global health set him on the cutting edge of the challenges of the twenty-first.

Drawing on fresh archival material and five years of extensive access to Carter and his entire family, Alter traces how he evolved from a timid, bookish child—raised mostly by a black woman farmhand—into an ambitious naval nuclear engineer writing passionate, never-before-published love letters from sea to his wife and full partner, Rosalynn; a peanut farmer and civic leader whose guilt over staying silent during the civil rights movement and not confronting the white terrorism around him helped power his quest for racial justice at home and abroad; an obscure, born-again governor whose brilliant 1976 campaign demolished the racist wing of the Democratic Party and took him from zero percent to the presidency; a stubborn outsider who failed politically amid the bad economy of the 1970s and the seizure of American hostages in Iran but succeeded in engineering peace between Israel and Egypt, amassing a historic environmental record, moving the government from tokenism to diversity, setting a new global standard for human rights, and normalizing relations with China among other unheralded and far-sighted achievements. After leaving office, Carter eradicated diseases, built houses for the poor, and taught Sunday school into his mid-nineties.

This engrossing, monumental biography will change our understanding of perhaps the most misunderstood president in American history.
Jonathan Alter is an award-winning historian, columnist and documentary filmmaker. An MSNBC political analyst and former senior editor at Newsweek, he is the author of three New York Times bestsellers: The Center Holds: Obama and His Enemies; The Promise: President Obama, Year One; and The Defining Moment: FDR's Hundred Days and the Triumph of Hope.
"Jonathan Alter's important, fair-minded, highly readable contribution to this literature provides not just an authoritative introduction to Carter's feats and failures but also insight into why a man of such intelligence, drive and noble intentions floundered in the White House as haplessly as he did... [Alter's] assessment of Carter the man— disciplined, driven, stubborn, detail-oriented, technocratic, pious— doesn't break radically from that of other historians. But Alter keeps Carter's myriad facets in view throughout, rendering his subject with a depth rarely achieved by political journalism."
— New York Times Book Review

“Splendid... Alter’s account is ably sourced and fluidly written, one of the best in a celebrated genre of presidential biography.”

“In this definitive biography, Jonathan Alter provides a wonderfully readable assessment of the character and achievements of our most underrated modern president. It is a deeply personal account, filled with fascinating new information. Carter's story is a needed inspiration in this dark time.”
—Walter Isaacson, New York Times bestselling author of Leonardo da Vinci

“This deeply researched and fluidly written biography is the first truly comprehensive look at our 39th president. Alter illuminates Carter’s character, and explains much about the strengths and weaknesses of the elusive man from Plains. This is a fascinating work.”
—Annette Gordon-Reed, Pulitzer Prize-winning author of The Hemingses of Monticello

"Jonathan Alter has a gift for beleaguered America— an insightful, uplifting portrait of Jimmy Carter, a former president who never gave up on activating America’s essential goodess." — Tom Brokaw

"His Very Best is a fascinating book, and Alter tells Carter's life story beautifully and with admirable fairness — he treats Carter as a real person, as flawed as anyone else, and not as a saint. Alter's pacing is wonderful; his accounts of some of the more dramatic events in Carter's presidency are thrillingly told, but this never comes at the cost of the humanity of the people involved. It's a book that's bound to fascinate anyone with an interest in American history, and an excellent look at the man whom Alter considers, justifiably, "perhaps the most misunderstood president in American history."
— NPR

"Alter is a talented storyteller, and his lively narrative captures Carter’s full arc from Georgia farm to White House and beyond."
— National Book Review

"In unfolding his carefully researched narrative, Alter portrays Carter as far more successful in his labors as chief executive than is generally acknowledged. A balanced and complete portrait."
— Booklist

“In this extraordinarily well-researched and well-written book, Jonathan Alter perfectly captures how Jimmy Carter was the most misunderstood president since Thomas Jefferson, and the only other not to lose a single American soldier in war. It's a compelling story of a complicated and brilliant life.”
—Andrew Young, former US Ambassador to the UN, Mayor of Atlanta, and close confidant to Dr. Martin Luther King Jr.

“Jonathan Alter has painted an important and revealing portrait of Jimmy Carter, an American president who led many different lives. Alter’s memorable book goes a long way toward illuminating the shadows that have long obscured him.”
—Jon Meacham, Pulitzer Prize-winning author of The Soul of America

"An engrossing story about a truly decent man."
— AARP