The Best of the Harvard Lampoon: 140 Years of American Humor (Hardcover) 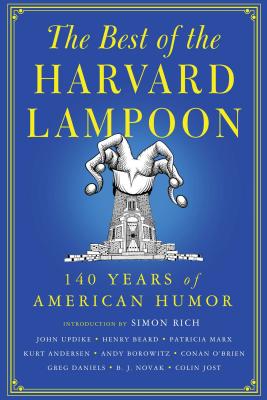 The Best of the Harvard Lampoon: 140 Years of American Humor (Hardcover)


Special Order—Subject to Availability
A collection of the best of The Harvard Lampoon—the spawning ground for Hollywood’s elite comedy writers and New Yorker humorists—revealing the hidden gems from their 140-year history.

Since its inception in 1876, The Harvard Lampoon has become a farm system for Hollywood’s best and most revered comedy writers. Lampoon alumni can be found behind the scenes of sitcoms and late-night shows, including Saturday Night Live, The Simpsons, The Office, 30 Rock, The Mindy Project, and many others. The Best of the Harvard Lampoon is the first anthology of The Lampoon’s extensive archives, featuring luminaries who have gone on to shape the comedy and literary landscape along with some of the best cartoons, illustrations, and satirical advertisements from over the years. Contributors include B.J. Novak, Henry Beard, Andy Borowitz, George Plimpton, Conan O’Brien, John Updike, Patricia Marx, and many others, with an introduction by New York Times bestselling author Simon Rich.
The Harvard Lampoon debuted in February 1876 and is the world’s longest continually published humor magazine. Written by seven undergraduates and modeled on Punch, the British humor magazine, the debut issue took the Harvard campus by storm. United States President Ulysses S. Grant was advised not to read the magazine, as he would be too much “in stitches” to run the government. Harvard Lampoon alumni include comedians Conan O’Brien, Andy Borowitz, Greg Daniels, Jim Downey, Al Jean, and B.J. Novak. Lampoon alumni write and have written for Saturday Night Live, The Simpsons, Futurama, Late Night with David Letterman, Seinfeld, The League, NewsRadio, The Office, 30 Rock, Parks and Recreation, and dozens of other shows. The Lampoon has also graduated many noted authors such as George Plimpton and John Updike.
For This Book...
Staff Pick