The Jersey Brothers: A Missing Naval Officer in the Pacific and His Family's Quest to Bring Him Home (Hardcover) 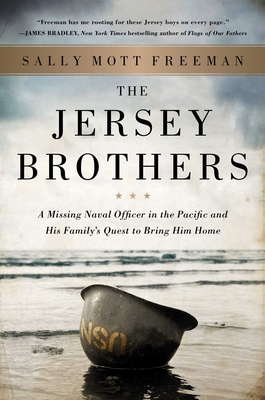 The Jersey Brothers: A Missing Naval Officer in the Pacific and His Family's Quest to Bring Him Home (Hardcover)


Special Order—Subject to Availability
The extraordinary, real-life adventure of three brothers at the center of the most dramatic turning points of World War II and their mad race to change history—and save one of their own.

They are three brothers, all Navy men, who end up coincidentally and extraordinarily at the epicenter of three of the war’s most crucial moments. Bill is picked by Roosevelt to run his first Map Room in Washington. Benny is the gunnery and anti-aircraft officer on the USS Enterprise, one of the only carriers to escape Pearl Harbor and by the end of 1942 the last one left in the Pacific to defend against the Japanese. Barton, the youngest and least distinguished of the three, is shuffled off to the Navy Supply Corps because his mother wants him out of harm’s way. But this protection plan backfires when Barton is sent to the Philippines and listed as missing-in-action after a Japanese attack. Now it is up to Bill and Benny to find and rescue him.

Based on ten years of research drawn from archives around the world, interviews with fellow shipmates and POWs, and primary sources including diaries, unpublished memoirs, and letters half-forgotten in basements, The Jersey Brothers is a remarkable story of agony and triumph—from the home front to Roosevelt’s White House, and Pearl Harbor to Midway and Bataan. It is the story, written with intimate, novelistic detail, of an ordinary young man who shows extraordinary courage as the Japanese do everything short of killing him. And it is, above all, a story of brotherly love: of three men finding their loyalty to each other tested under the tortures of war—and knowing that their success or failure to save their youngest brother will shape their family forever.
Sally Mott Freeman was a speechwriter and media and public relations executive for twenty-five years. She is currently Board Chair Emerita of The Writer’s Center, the premier independent literary center in the mid-Atlantic. The Jersey Brothers is her first book.
“Highly dramatic history. [Freeman’s] book is liable to break the hearts of Unbroken fans, and it’s all true.”
– The New York Times

“A masterpiece of storytelling, infused with heroism and adventure. This moving portrait of three brothers is a brilliantly researched and written history of America’s wartime role in the Pacific.”
– Lynne Olson, New York Times bestselling author of Those Angry Days

“An evocative real-life tale of agony and triumph about brotherly love and a young American who discovers his personal courage amidst the tortures of war. Freeman had me rooting for these Jersey boys on every page.”
– James Bradley, New York Times bestselling author of Flags of Our Fathers

“Better than fiction because it is real.... The Jersey Brothers demonstrates that a well-told story is just that, whatever its genre.”
– New York Journal of Books

“A gripping, deeply moving saga of an American family whose experiences cast a new light on one of the most harrowing and heroic periods in American history. In their devotion to each other and to their country, these three brothers inspire us with courage, intelligence, and exceptional resilience.”
– Sally Bedell Smith, New York Times bestselling author of Elizabeth the Queen

“The Jersey Brothers shines in singularity. A blend of history, family saga and family questions, [Freeman’s] first book proves to be a winning and moving success.... A decade in the making, The Jersey Brothers adds an authoritative entry to the vast canon of war literature, one that elicits cheers, tears and a few jeers.... Freeman’s dogged investigative skills, the truth they reveal and her ability to render it with grace combine to make her book — a gripping story of courage and carnage, heroism and horror, devotion and death — unforgettable.”
– Richmond Times-Dispatch

“A captivating tour-de-force that immediately stands tall with the best of other World War II combat literature.... Freeman weaves together a story that will tug at the emotions of anyone who has ever known someone who has worn our nation’s uniform in peacetime or at war.”
– San Antonio Express-News

“In her moving new epic The Jersey Brothers, Sally Mott Freeman captures a story of love, devotion and perseverance shared by three inspiring siblings caught in the epicenter of some of the war’s most crucial actions… A rare look into the deepest personal emotions of a family of America’s Greatest Generation.”
– The Dallas Morning News

“The Jersey Brothers brings welcome comparisons to Laura Hildebrand’s Unbroken... both masterfully written stories of endurance and sacrifice that tell bigger truths than the experience of individuals during wartime.”
– Naval History

“Deserves a translation to screen as compelling as “Saving Private Ryan.’’ The Jersey Boys lasting message is: If we learn from our past we can prevent such atrocities in the present. This book is so much more than a summer read; it should be a required one.”
– Pittsburgh Post-Gazette

“The Jersey Brothers captures the real-life story of three brothers whose bond to family and love for country take them to extraordinary lengths at one of the most pivotal points in American history. From the decks of the USS Enterprise to the depths of the Japanese prison camps, Sally Mott Freeman takes readers on an epic journey in this remarkable tribute to the Greatest Generation.”
– Senator John McCain, New York Times bestselling author of Thirteen Soldiers

“A terrific book that I was just totally captivated by.”
– Hillary Rodham Clinton

“A great summer read by a splendid writer.... The characters are vividly drawn, the action riveting, and the suspense almost overwhelming.”
– Karl Rove, New York Times bestselling author of Courage and Consequence

“A searing story of courage, love, and family. The Jersey Brothers is impressively broad in scope—from Roosevelt’s White House to the great battles of the Pacific to prisoner of war camps deep in the Philippine jungle—and brimming with endlessly fascinating details that only real soldiers could know.”
– Jay Winik, New York Times bestselling author of 1944

“Do we need another book about WWII? If it is as engaging as The Jersey Brothers, the answer is a resounding yes.... The Jersey Brothers is an important addition to the historical record; it's also a spellbinding cliffhanger.”
– New Jersey Monthly

“Richly informed by Freeman’s deep research, The Jersey Brothers is a powerfully evocative story of three brothers and their remarkable love, courage, and adventure during a decisive moment in World War II.”
– Don Katz, founder and CEO of Audible and author of Home Fires: An Intimate Portrait of One Middle-Class Family in Postwar America

“As engaging and readable as a fine novel.”
– Minneapolis Star Tribune

“Freeman’s riveting account reads like fiction, and proves that the well of compelling war narratives has nowhere near run dry.”
– Business Insider

“Author Sally Mott Freeman takes an intimately human approach to this war story, adding a meaningful and memorable chapter to our understanding of the Greatest Generation.”
– The Amazon Book Review (Best Book of the Month)

“This true tale would make the perfect Father’s Day gift.... A touching, intimate tale of family, loyalty, and the harsh realities of war, this well-researched true story is bound to please any dad – just don’t be surprised to find him bawling his eyes out by the final page.”
– BookTrib

“A riveting war story. But it is a family story as well, its gripping moments in time meticulously assembled by Freeman.”
– Bergen Record

“Too exciting to be quite believable as fiction; luckily, it’s entirely true.... Deeply researched, intelligently judged, vividly presented.... And at its heart [The Jersey Brothers is] a serious, indeed deeply moving, family novel: you’ll remember the mother of these guys as vividly as the brothers themselves.”
– Sullivan County Democrat

“This story of pain and brotherly love... makes the perfect choice for a summer read.”
– Asbury Park Press

“This nonfiction book is one that reads like a novel.”
– Fredericksburg Free Lance Star

“Freeman proves to be a strongly motivated researcher, who poignantly conveys a sorrowful experience encountered by thousands of American families in WWII.”
–  Booklist

“A touching story.... Provides insights into Japanese treatment of POWs and the daily life of these prisoners.... Recommended for readers looking for personal accounts of World War II.”
– Library Journal