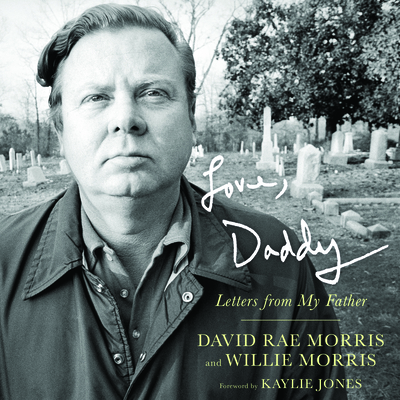 
In Stock—Click for Locations
Love, Daddy: Letters from My Father examines the complexities of father-and-son relationships through letters and photographs. Willie Morris wrote scores of letters to his only son, David Rae Morris, from the mid-1970s until Willie's death in 1999. From David Rae's perspective, his father was often emotionally disconnected and lived a peculiar lifestyle, often staying out carousing well into the night. But Willie was an eloquent and accomplished writer and began to write his son long, loving, and supportive letters when David Rae was still in high school. An aspiring photographer, David Rae was confused and befuddled by his father's warring personalities and began photographing Willie using the camera as a buffer to protect him and his emotions. The collection begins in early 1976 and continues for more than twenty years as David Rae moved about the country, living in New York, Massachusetts, Texas, Mississippi, Tennessee, and Minnesota, before finally settling in Louisiana. "All the while my father was writing to me I somehow managed to save his letters," David Rae writes. "I left them in storage and in boxes and in piles of clutter on desks and in basements. They were kind, offering a love that he found difficult to express openly and directly. He simply was more comfortable communicating through letters." The letters cover topics ranging from writing, the weather, Willie's return to Mississippi in 1980, the Ole Miss football season, and local town gossip to the fleas on the dog to just life and how it's lived. Likewise, the photographs are portraits, documentary images of daily life, dinners, outings, and private moments. Together they narrate and illuminate the complexities of one family relationship, and how, for better or worse, that love endures the passage of time.
David Rae Morris's photographs have appeared in numerous publications including Time, Newsweek, USA Today, the New York Times, and National Geographic, as well as in Missing New Orleans, Before (During) After: Ten Photographers' Visual Reactions to Hurricane Katrina, Katrina Exposed: A Photographic Reckoning, and My Mississippi, published by University Press of Mississippi in 2000. He has made several documentary films including Yazoo Revisited: Integration and Segregation in a Deep Southern Town, which won the "Most Transformative Film" award at the 2015 Crossroads Film Festival in Jackson. He was born in Oxford, England, and grew up in New York City. He and his longtime partner, Susanne Dietzel, live in New Orleans. Willie Morris (1934-1999), a native Mississippian, came to national prominence in the early 1960s as the youngest-ever editor of Harper's magazine. His first book, North Toward Home, became an instant classic. Among his other notable books are New York Days, My Dog Skip, The Courting of Marcus Dupree, and My Mississippi, the latter two published by University Press of Mississippi.