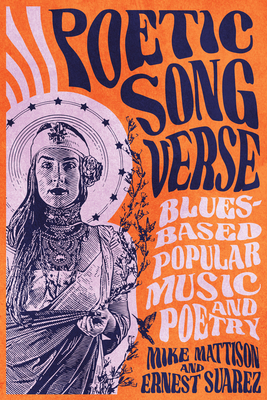 
On Our Shelves Now at:
Poetic Song Verse: Blues-Based Popular Music and Poetry invokes and critiques the relationship between blues-based popular music and poetry in the twentieth and twenty-first centuries. The volume is anchored in music from the 1960s, when a concentration of artists transformed modes of popular music from entertainment to art-that-entertains. Musician Mike Mattison and literary historian Ernest Suarez synthesize a wide range of writing about blues and rock--biographies, histories, articles in popular magazines, personal reminiscences, and a selective smattering of academic studies--to examine the development of a relatively new literary genre dubbed by the authors as "poetic song verse." They argue that poetic song verse was nurtured in the fifties and early sixties by the blues and in Beat coffee houses, and matured in the mid-to-late sixties in the art of Bob Dylan, the Beatles, the Rolling Stones, the Doors, Jimi Hendrix, Joni Mitchell, Leonard Cohen, Gil Scott-Heron, Van Morrison, and others who used voice, instrumentation, arrangement, and production to foreground semantically textured, often allusive, and evocative lyrics that resembled and engaged poetry. Among the questions asked in Poetic Song Verse are: What, exactly, is this new genre? What were its origins? And how has it developed? How do we study and assess it? To answer these questions, Mattison and Suarez engage in an extended discussion of the roots of the relationship between blues-based music and poetry and address how it developed into a distinct literary genre. Unlocking the combination of richly textured lyrics wedded to recorded music reveals a dynamism at the core of poetic song verse that can often go unrealized in what often has been considered merely popular entertainment. This volume balances historical details and analysis of particular songs with accessibility to create a lively, intelligent, and cohesive narrative that provides scholars, teachers, students, music influencers, and devoted fans with an overarching perspective on the poetic power and blues roots of this new literary genre.
Mike Mattison is a singer, songwriter, and founding member of Scrapomatic and the Tedeschi Trucks Band with whom he has won two Grammy Awards, eight Blues Music Awards from the Blues Music Foundation, and four Canadian Maple Blues Awards. He graduated cum laude from Harvard University in 1991. He tours over 150 days annually and frequently publishes essays and music journalism. Ernest Suarez is the David M. O'Connell Professor of English at the Catholic University of America in Washington, DC, and executive director of the Association of Literary Scholars, Critics, and Writers. He was a Senior Fulbright Lecturer in Spain and China and was named the Carnegie Foundation Professor of the Year for the District of Columbia. He has published widely on southern literature, poetry, and music.