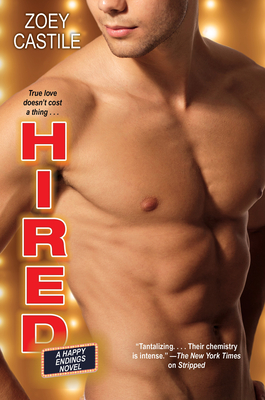 This is book number 2 in the Happy Endings series.

For a man who makes his living pleasuring women, what happens when the only pay-out worth having is love?

Faith Abigail Charles has always done the right thing. So when her mother runs for mayor of New Orleans, Faith puts her law career on hold to help her win. But when tensions run high, Faith trades one kind of heat for another—in the arms of a hard-bodied stranger. He’s everything a woman dreams of in a lover. So much so that her one-night stand turns into two, then three, then four …

For Aiden Rios, meeting smart, sexy Faith feels like fate. After being ditched by his client in the Big Easy, the high-paid male escort needs a little company himself. Aiden knows he’ll have to come clean about his line of work, and he plans to—right after another taste of Faith’s sweetness—and another and another … Until a chance meeting with his client leaves Aiden exposed—and Faith shocked and hurt. Now the hired hottie must show Faith that the love they share is bigger than the scandal threatening to destroy them …

“There’s no other word to describe this book but delicious—it’s as sinful and pleasurable as a perfect piece of late summer pie.”
—Entertainment Weekly

“Stripped is a modern rom-com that’s equal parts sexy and sweet.”
—Shondaland
Zoey Castile was born in Ecuador and raised in Queens, New York. She started writing in her teens and pursued that love in her studies at Hunter College and the University of Montana. For nearly a decade, she worked as a bartender, hostess, and manager in New York City's nightlife. You can follow her on Twitter and Instagram @ZoeyCastile. You can also email her at ZoeyCastile@gmail.com.
“Castile turns up the heat… Sizzling… The contrast between Aiden’s Colombian background and Faith’s African-American heritage plays well against the New Orleans locale which provides both atmosphere and sensuality.”
—Publishers Weekly

"With a contemporary romance series that just keeps getting better, Castile is becoming a surefire bet for readers in search of adorable, emotionally fluent romances that will undoubtedly trigger a happy cry or two."
—BookPage