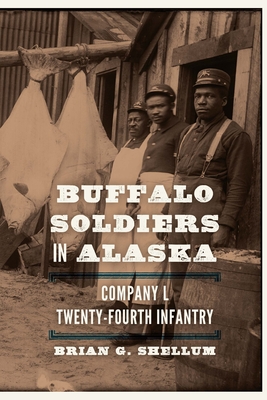 
Not On Our Shelves—Ships in 1-5 Days
The town of Skagway was born in 1897 after its population quintupled in under a year due to the Klondike gold rush. Balanced on the edge of anarchy, the U.S. Army stationed Company L, a unit of Buffalo Soldiers, there near the end of the gold rush. Buffalo Soldiers in Alaska tells the story of these African American soldiers who kept the peace during a volatile period in America’s resource-rich North. It is a fascinating tale that features white officers and Black soldiers safeguarding U.S. territory, supporting the civil authorities, protecting Native Americans, fighting natural disasters, and serving proudly in America’s last frontier.

Despite the discipline and contributions of soldiers who served honorably, Skagway exhibited the era’s persistent racism and maintained a clear color line. However, these Black Regulars carried out their complex and sometimes contradictory mission with a combination of professionalism and restraint that earned the grudging respect of the independently minded citizens of Alaska. The company used the popular sport of baseball to connect with the white citizens of Skagway and in the process gained some measure of acceptance. Though the soldiers left little trace in Skagway, a few remained after their enlistments and achieved success and recognition after settling in other parts of Alaska.

Brian G. Shellum is a retired army officer and former historian and intelligence officer with the Department of Defense. He is the author of Black Cadet in a White Bastion: Charles Young at West Point (Nebraska, 2006) and Black Officer in a Buffalo Soldier Regiment: The Military Career of Charles Young (Nebraska, 2010).
"Shellum's book uses the stories of individual soldiers to tell the narrative whenever possible and explains the nature of the U.S. Army in the last quarter of the nineteenth century: how promotions, reenlistments and reporting worked, the organization and bureaucracy of the Army, even changes in how soldiers were fed. This book is a fitting tribute to the Buffalo Soldiers of Alaska, especially since many of them made the decision to stay there and add to the history of Alaska."—James D. Crabtree, Military Review

"Readers who are interested in black military history or in the history of early Alaska will certainly want to add this book to their library."—Roger D. Cunningham, Journal of America's Military Past

"Buffalo Soldiers in Alaska is a welcome addition to the literature on the Buffalo Soldiers. Shellum's thorough research and clear writing makes it suitable for academics and general audiences alike."—Troy A. Hallsell, Air & Space Power Journal

"Shellum has provided an invaluable and detailed examination of the Skagway that Black soldiers inhabited."—David James, Anchorage Daily News

“Brian Shellum has a knack for unlocking stories of Black soldiers in our military. With Buffalo Soldiers in Alaska he takes us beyond the racism-tainted news blurbs of early twentieth-century newspapers and gives life to these veterans who guarded the ‘Gateway to the Klondike’ and were part of the community. This is an important new chapter in Alaska history.”—Jeff Brady, author of Skagway: City of the New Century

“The history of Alaska’s turn-of-the-century gold rushes has been told a hundred times in a hundred different ways. Brian Shellum’s Buffalo Soldiers in Alaska shines much-needed light on a part of the story that has received little attention from scholars: the Black soldiers sent to keep order in Skagway and their interactions with white citizens and Alaska Natives and with Canadians on the other side of the border. This important book is a must-read for anyone interested in Alaska history.”—Ross Coen, editor of Alaska History

“Brian Shellum provides a wealth of facts about the lives of the Buffalo Soldiers who served in Alaska. It should be essential reading for anyone interested in the history of African Americans, Alaska, or twentieth-century military history.”—Catherine Spude, historian, author of Saloons, Prostitutes, and Temperance in Alaska Territory

“The author pays particular attention to the Black enlisted men who served in Alaska during the halcyon days of the Klondike gold rush. As such, this well-illustrated and carefully researched study sheds new light on a little-known story in U.S. Army history.”—John P. Langellier, author of Scouting with the Buffalo Soldiers: Lieutenant Powhatan Clarke, Frederic Remington, and the 10th U.S. Cavalry in the Southwest

“A thoroughly researched and well-presented account of a little-known episode in Alaskan history. No grand themes, pivotal events, or outsized personalities. The book is a welcome expansion of the story of African Americans in the nation’s military.”—Tom Phillips, independent historian, coauthor of The Black Regulars, 1866–1898

“Here is an extensively researched and detailed account of a little-known piece of gold rush history. What I particularly enjoyed was reading portions of the narrative that I have investigated myself but from a Canadian perspective. Well worth the read.”—Michael Gates, former Parks Canada curator and author of Dalton’s Gold Rush Trail and From the Klondike to Berlin