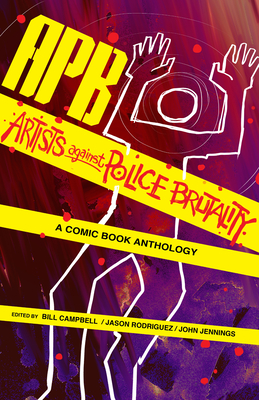 
Special Order—Subject to Availability
An incredibly unique comic book benefit project featuring comic shorts, pin-ups, short essays, and flash fiction, the proceeds of which will be going to the Innocence Project

We’ve all seen the pictures: a six-year-old Ruby Bridges being escorted by U.S. marshals on her first day at an all-white, New Orleans school in 1960; a police dog attacking a demonstrator in Birmingham; fire hoses turned on protesters; Martin Luther King Jr. addressing a crowd on the National Mall. These pictures were printed in papers, flashed across television screens, and helped to change the laws of this nation, but not necessarily all of the attitudes. Similarly, we’ve seen the pictures of Michael Brown lying face down in a pool of his own blood for hours; protesters with their hands up, facing down militarized policemen. There are videos of Eric Garner choked to death, John Crawford III shot down in Walmart for carrying a toy gun, and 12-year-old Tamir Rice gunned down in broad daylight for the same reason. APB: Artists Against Police Brutality is a benefit comic book anthology that focuses on hot-button issues including police brutality, the justice system, and civil rights, with one primary goal: show pictures and tell stories that get people talking. The proceeds will go to the Innocence Project, an organization dedicated to exonerating wrongfully convicted people.
Bill Campbell is the founder of Rosarium Publishing and the author the novels Koontown Killing Kaper, My Booty Novel, and Sunshine Patriots as well as the essay collection, Pop Culture: Politics, Puns, and “Poohbutt” from a Liberal Stay-at-Home Dad. He is the coeditor of the anthologies Mothership: Tales from Afrofuturism and Beyond and Stories for Chip: A Tribute to Samuel R. Delany. He lives in Washington, DC. Jason Rodriguez is an Eisner and Harvey Award–nominated writer and editor. He is the author of Postcards: True Stories That Never Happened and Try Looking Ahead, and his work has been published by Dark Horse Comics, Random House, and several small publishers. He lives in Arlington, Virginia. John Jennings is an associate professor of visual studies at the State University of New York–Buffalo. He is an award-winning graphic novelist and the author of Pitch Black Rainbow: The Art of John Jennings. He lives in Buffalo, New York.
"The bodies and violence on display in the book are a visceral attempt at showing you the impact of this violence on individuals and communities, but again, if you look deeper, you will see that APB is also a love letter–to the victims of said violence, of course, but it’s also a direct attempt at convincing oppressive systems that victims and potential victims are worthy of love, respect, and compassion." —Troy Wiggins, panels.net