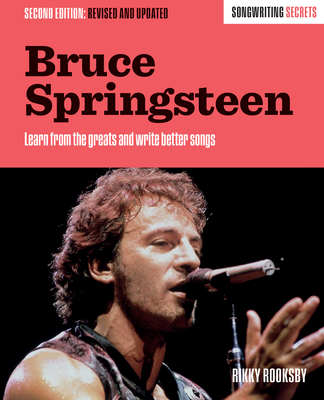 
Not On Our Shelves—Ships in 1-5 Days
Fifty years since Bruce Springsteen's debut album Greetings from Asbury Park, N.J. brought a new songwriting talent to the public, Bruce Springsteen is long established as one of the giants of popular music. Through a long career of studio and live albums, archival releases, massive tours with the E Street Band, and more recently solo performances on Broadway, Springsteen has demonstrated a remarkable talent for communicating with a wide audience. Whether acoustic or electric, plainly presented or richly orchestrated, his narrative and character-based songs have captured and reflected the pains, hopes, dilemmas, and dreams of millions. Bruce Springsteen: Songwriting Secrets, Revised and Updated presents his music as the starting point for a masterclass in the art of writing powerful-and successful-songs. Songwriting guru Rikky Rooksby surveys Springsteen's rich catalogue and shows how the common techniques they employ can help you: -Structure intros, verses, choruses, and bridges -Write songs using anything from two to seven chords -Arrange instruments for maximum effect -Mimic the sound of Springsteen's chords and progressions -Write lyrics that escape clich , achieve clarity, and ring true This revised edition takes into account all the original music Springsteen has released since the first edition of 2004, including Devils & Dust (2005), Magic (2007), Working on a Dream (2009), Wrecking Ball (2012), High Hopes (2014), Western Stars (2019) and Letter to You (2020), along with other archival material.
Rikky Rooksby is a guitar teacher, songwriter/composer, and writer on music. He is the author of How to Write Songs on Guitar (2000, revised 2009, 2020), Inside Classic Rock Tracks (2001), Riffs (2002, 2010, revised 2021), The Songwriting Sourcebook (2003, revised 2011), Chord Master (2004, revised 2016), Melody (2004), Songwriting Secrets: Bruce Springsteen (2005), How to Write Songs on Keyboards (2005), Lyrics (2006, revised 2021), Arranging Songs (2007), How to Write Songs in Altered Guitar Tunings (2010), and Songs and Solos (2014). His entries for many rock musicians appear in the new Dictionary of National Biography (OUP), and he has published interviews, reviews, articles, and transcriptions. Visit his website at www.rikkyrooksby.com for more information.