Music, Lyrics, and Life: A Field Guide for the Advancing Songwriter (Hardcover) 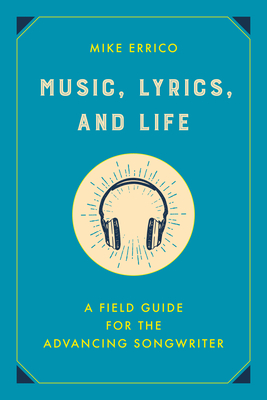 Music, Lyrics, and Life: A Field Guide for the Advancing Songwriter (Hardcover)


Special Order—Subject to Availability
Music, Lyrics, and Life is the songwriting class you always wish you'd taken, taught by the professor you always wish you'd had. It's a deep dive into the heart of questions asked by songwriters of all levels, from how to begin journaling to when you know that a song is finished. With humor and empathy, acclaimed singer-songwriter Mike Errico unravels both the mystery of songwriting and the logistics of life as a songwriter. For years, this set of tools, prompts, and ideas has inspired students on campuses including Yale, Wesleyan, Berklee, Oberlin, and NYU's Clive Davis Institute of Recorded Music. Alongside his own lessons, Errico interviews the writers, producers, and A&R executives behind today's biggest hits and investigates the larger questions of creativity through lively conversations with a wide range of innovative thinkers: astrophysicist Janna Levin explains the importance of repetition, both in choruses and in the exploration of the universe; renowned painter John Currin praises the constraints of form, whether it's within a right-angled canvas or a three-minute pop song; bestselling author George Saunders unpacks the hidden benefit of writing, and revising, authentically; and much more. The result is that Music, Lyrics, and Life ends up revealing as much about the art of songwriting as it does about who we are, and where we may be going. This is a book for songwriters, future content creators, music lovers, and anyone who wants to understand how popular art forms are able to touch us so deeply. Mike Errico has honed these lessons over years of writing, performing, teaching, and mentoring, and no matter where you are on your songwriting journey, Music, Lyrics, and Life will help you build a creative world that's both intrinsic to who you are, and undeniable to whoever is listening.
New York-based recording artist, writer, and lecturing professor Mike Errico has built his name on the strength of critically acclaimed releases and extensive composition for film and TV. Live, Errico has toured internationally, playing major music festivals and sharing stages with top artists and songwriters. In addition to his recording career, Errico's opinions and insights have appeared in publications including the New York Times, CNN, the Wall Street Journal, Fast Company, the UK Independent, and the Observer. He teaches songwriting at universities including Yale, Wesleyan, and NYU's Clive Davis Institute of Recorded Music.