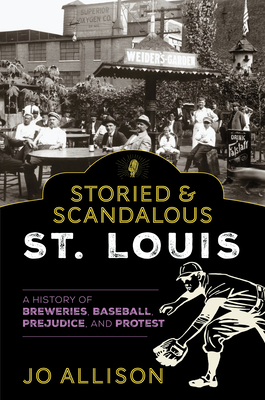 
Not On Our Shelves—Ships in 1-5 Days
At the turn of the twentieth century, St. Louis, Missouri, was the fourth largest city in the country. For years, it was the westernmost metropolis, known for its manufacturing, beer, railroad hub, music, baseball, World's Fair, and its romance with the Mississippi. This collection of shocking stories ripped from the headlines of the Gateway City's seamy past includes tales of cholera epidemics, deadly newspaper-daily duels, ragtime racism, and Spiritualism scuffles. Readers will also meet the formative female figures behind the women's suffrage movement in St. Louis, and discover how local brewers fought against Prohibition with the help of America's favorite pastime-baseball.
Jo Allison (the pen name of Linda Harris Dobkins) grew up in Missouri and spent ten years as a journalist, mostly for newspapers. She was the first woman to do television news in her home town of Joplin, Missouri. Although she went on to teaching and researching, she believes reporting was the best education she could have had. Allison writes historical fiction as well as nonfiction, including a mystery series that begins in 1910 St. Louis.