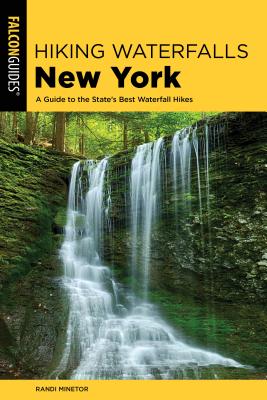 
Not On Our Shelves—Ships in 1-5 Days
From the top of the Adirondack Northway to the precipitous drop that creates Niagara Falls, Hiking Waterfalls in New York State provides all of the information readers need to find their way to waterfalls hidden in the crevices of the Catskill Mountains, high on the faces of the High Peaks, flowing through magnificent gorges into the Finger Lakes, or deep in the backcountry of the Southern Tier. Detailed driving and hike descriptions include slices of history and glimpses of geology. GPS coordinates, maps, and color photos of over 100 of the state's best waterfalls make certain that hikers and sightseers will find their way to these sparking gems, whether they can be seen from the roadside or at the end of a lengthy trail. The book has less than 10 percent overlap with FalconGuides' popular Hiking New York.
Randi Minetor has written eleven books for FalconGuides, including the nine-book Passport To Your National Parks(R) Companion Guides series. Her groundbreaking book Breadwinner Wives and the Men They Marry (New Horizon Press, 2002) continues to receive national media attention, and Randi has appeared on the NBC Today Show and Court TV, and as an expert on high-earning women in dozens of magazines from InStyle and Blender to Redbook and Men's Health. A marketing and public relations professional, Randi has written for many trade magazines in fields ranging from technical theater to computer technology. Her husband, photographer Nic Minetor, is a professional lighting designer for theater, film, opera, dance and television, including the popular PBS series Second Opinion and eighteen seasons of the Eastman School of Music's Opera Theatre. The Minetors live in Rochester, NY.