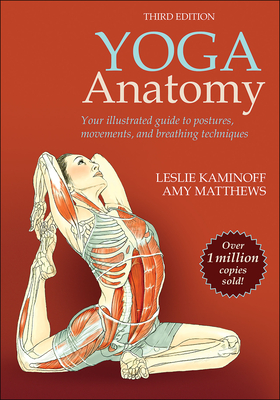 
Not On Our Shelves—Ships in 1-5 Days
With more than a million copies sold, Yoga Anatomy has become an invaluable resource for yoga practitioners, enthusiasts, and instructors around the world. Expanded and updated, the third edition of Yoga Anatomy will provide you with an even deeper understanding of yoga and of the structures and principles underlying each movement.

Building on the success of its predecessors, this revamped edition features new content to further augment your yoga practice:
This beautifully illustrated resource sorts yoga poses into six sections—standing, sitting, kneeling, supine, prone, and arm supports—and provides an inside look into each pose to offer a better understanding of the interactions of the muscles, joints, and nervous system that we use to create movement and breathing.

Authors Leslie Kaminoff and Amy Matthews, both internationally respected specialists in yoga and breath anatomy, offer a solid grounding in the principles of physical practice common to many systems of yoga. Whether you are just beginning your journey or have been practicing for years, Yoga Anatomy will be an invaluable resource—one that allows you to see each movement in an entirely new light.
Leslie Kaminoff is a yoga educator inspired by the tradition of T.K.V. Desikachar, one of the world’s foremost authorities on the individualized, breath-centered application of yoga for healing. Leslie is the founder of The Breathing Project, a New York City nonprofit organization dedicated to the educational enrichment of the yoga, movement, and embodiment communities. An internationally recognized specialist with over four decades of experience in the fields of yoga and breath anatomy, Kaminoff has led workshops for many of the leading yoga associations, schools, and training programs worldwide. He has also produced and helped to organize international conferences and has actively participated in the ongoing national debate regarding certification standards for yoga teachers and yoga therapists.

Kaminoff is the founder of the highly respected yoga blog e-Sutra and creator of a wealth of digital content, including the highly successful online courses at yogaanatomy.net. Leslie and his work and life partner, Lydia Mann, travel and teach together; they reside in both New York City and Cape Cod, Massachusetts.

Amy Matthews has been teaching movement workshops and courses in the United States and internationally since 1994. Integrating experiential anatomy, kinesiology, embryology, and developmental movement with inquiries into pedagogy, educational philosophy, and movement practices, she has taught on somatic certification programs and in a variety of university and studio settings.

Amy is a Body-Mind Centering teacher, an Infant Developmental Movement Educator, a Certified Movement Analyst, and a movement therapist and yoga teacher. She cofounded Babies Project with Sarah Barnaby, and with Leslie Kaminoff she created the advanced studies program for The Breathing Project.

She is currently based in Maine and New York City.