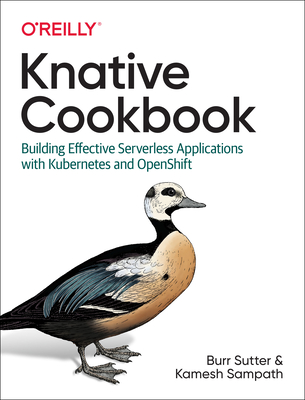 Enterprise developers face several challenges when it comes to building serverless applications, such as integrating applications and building container images from source. With more than 60 practical recipes, this cookbook helps you solve these issues with Knative--the first serverless platform natively designed for Kubernetes. Each recipe contains detailed examples and exercises, along with a discussion of how and why it works.

If you have a good understanding of serverless computing and Kubernetes core resources such as deployment, services, routes, and replicas, the recipes in this cookbook show you how to apply Knative in real enterprise application development. Authors Kamesh Sampath and Burr Sutter include chapters on autoscaling, build and eventing, observability, Knative on OpenShift, and more.

With this cookbook, you'll learn how to:

A lifelong developer advocate, community organizer, and technology evangelist, Burr Sutter is a featured speaker at technology events around the globe--from Bangalore to Brussels and Berlin to Beijing (and most parts in between)--he is currently Red Hat's Director of Developer Experience. A Java Champion since 2005 and former president of the Atlanta Java User Group, Burr founded the DevNexus conference--now the second largest Java event in the U.S.--with the aim of making access to the world's leading developers affordable to the developer community. When not speaking abroad, Burr is also the passionate creator and orchestrator of highly-interactive live demo keynotes at Red Hat Summit, the company's premier annual event.Kamesh is a Principal Software Engineer at Red Hat, as part of his additional role as Director of Developer Experience at Red Hat -- he actively educates on Kubernetes/OpenShift, Servicemesh, and Serverless technologies . With a career spanning close to two decades, most of Kamesh's career was with services industry helping various enterprise customers build Java-based solutions. Kamesh has been a contributor to Open Source projects for more than a decade and he now actively contributes to projects like Knative, Minishift, Eclipse Che, fabric8 etc., As part of his developer philosophy he strongly believes in LEARN MORE, DO MORE and SHARE MORE!