Windows 10 May 2019 Update: The Missing Manual: The Book That Should Have Been in the Box (Paperback) 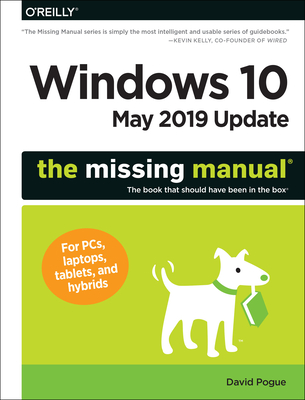 Windows 10 May 2019 Update: The Missing Manual: The Book That Should Have Been in the Box (Paperback)

The Windows 10 May 2019 Update adds a host of new and improved features to Microsoft's flagship operating system--and this jargon-free guide helps you get the most out of every component.

This in-depth Missing Manual covers the entire system and introduces you to the latest features in the Windows Professional, Enterprise, Education, and Home editions. You'll learn how to take advantage of improvements to the Game Bar, Edge browser, Windows Online, smartphone features, and a lot more.

Written by David Pogue--tech critic for Yahoo Finance and former columnist for The New York Times--this updated edition illuminates its subject with technical insight, plenty of wit, and hardnosed objectivity.

From 2000 to 2013, David Pogue was the New York Times weekly tech columnist. After a five-year detour to Yahoo Finance, he's now he's back at the Times, writing the "Crowdwise" feature for the "Smarter Living" section. He's a four-time Emmy winner for his stories on "CBS Sunday Morning," and a host of 17 science specials on "NOVA" on PBS. David is one of the world's best-selling "how-to" authors, with more than 100 titles and 3 million copies in print. They include seven books in the "For Dummies" series, his own Pogue's Basics series of essential tips and shortcuts, and the Missing Manual series of computer books.