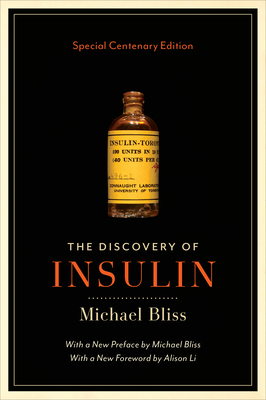 The discovery of insulin at the University of Toronto in 1921-2 was one of the most dramatic events in the history of the treatment of disease. Insulin, discovered by the Canadian research team of Frederick Banting, Charles Best, James Collip, and John Macleod, was a wonder drug with the ability to bring diabetes patients back from the brink of death. It was no surprise that in 1923 the Nobel Prize for Medicine was awarded for its discovery.

In this engaging and award-winning account, historian Michael Bliss draws on archival records and personal adventures to recount the fascinating story behind the discovery of insulin - a story as much filled with fiery confrontation and intense competition as medical dedication and scientific genius.

With a new preface by Michael Bliss and a foreword by Alison Li, the special centenary edition of The Discovery of Insulin honours the one hundredth anniversary of insulin's discovery and its continued significance a century later.