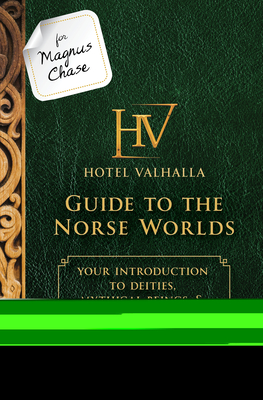 
Not On Our Shelves—Ships in 1-5 Days
#1 NEW YORK TIMES BEST-SELLING AUTHOR
A can't-live-without guide for guests of the Hotel Valhalla, this volume contains facts about the Norse gods as well as other characters and creatures you might encounter if you are fortunate enough to be chosen as one of Odin’s brave warriors.
So you've made it to Valhalla. Now what?This “who’s who” guide to the gods, goddesses, and other important figures of Norse mythology was commissioned by Helgi, who, after more than a millennium as manager of Hotel Valhalla, became fed up with answering the same questions from newly deceased heroes at check-in.
The profiles provide essential stats, interviews, and personal reflections so you can identify the gods and avoid those awkward introductions. Handy facts about other beings round out this go-to tome. You’ll never see Ratatosk as a cute little rodent or confuse a dwarf with an elf ever again!


Rick Riordan, dubbed “storyteller of the gods” by Publishers Weekly, is the author of four #1 New York Times best-selling middle grade series with more than 50 million copies sold in the US: Percy Jackson and the Olympians and The Heroes of Olympus, based on Greek and Roman mythology; the Kane Chronicles, based on Ancient Egyptian mythology; and Magnus Chase and the Gods of Asgard, based on Norse mythology. Rick collaborated with illustrator John Rocco on two #1 New York Times best-selling collections of Greek myths for the whole family: Percy Jackson’s Greek Gods and Percy Jackson’s Greek Heroes. Rick lives in Boston, Massachusetts with his wife and two sons. Follow him on Twitter at @camphalfblood.