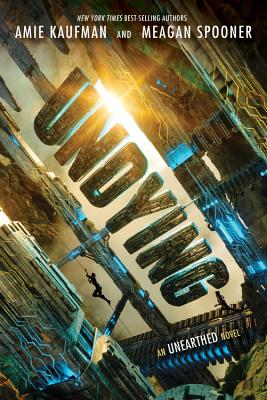 
Special Order—Subject to Availability
Earth's fate rests in their hands. Trapped aboard the Undying's ancient spaceship and reeling from the truth they've uncovered, Mia and Jules are desperate to warn their home about what's coming.

After a perilous escape, they crash-land on Earth's surface but Jules and Mia can hardly fathom their new predicament: No one believes them. Because the threat against Earth is hiding in plain sight.

A mounting global crisis is taking shape, starting with a mysterious illness that seems to reduce its victims to a regressed state. Jules and Mia have no choice but to take matters into their own hands, escaping custody of the International Alliance in order to reunite Jules with his father, the disgraced expert on the alien race, whose research may be the key to saving humanity.

From the mountains of Spain to the streets of Prague, the epic conclusion to the Unearthed series is a white-knuckle ride that will keep readers guessing until the final page.
Amie Kaufman and Meagan Spooner are longtime friends and sometime flatmates who have traveled the world (but not yet the galaxy), covering every continent between them. They are sure outer space is only a matter of time. Meagan, who is also the author of the Skylark trilogy, currently lives in Asheville, North Carolina. Amie, who is the coauthor of the Illuminae Files, lives in Melbourne, Australia. Although they currently live apart, they are united by their love of space opera, road trips, and second breakfasts. You can find them on Twitter @AmieKaufman and @MeaganSpooner.
"The action-packed save-the-world plot is underscored by the protagonists' more relatable concerns about saving their family members, and revelations about the Undying provide a layer of complexity to an otherwise light sf adventure."—Booklist

"A literally breathtaking archaeological expedition. Spooner and Kaufman prove once again that no one does high-stakes adventure shenanigans like they do."—E.K. Johnston, #1 New York Times best-selling author of Star Wars: Ahsoka