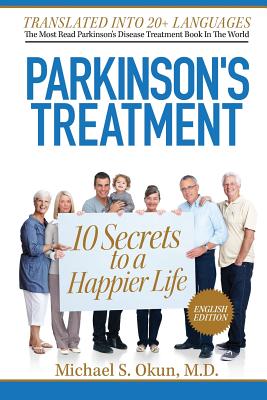 
Not On Our Shelves—Ships in 1-5 Days
(This book cannot be returned.)
Internationally renowned as both a neurologist and a leading researcher, Dr. Okun has been referred to as, "the voice of the Parkinson's disease patient." He has an international following on the National Parkinson Foundation's Ask the Doctor web-forum. His many books and internet blog posts are brimming with up-to date and extremely practical information. He has a talent for infusing his readers with positivity and optimism. In his current book, he unmasks the important secrets applicable to every Parkinson's disease patient. For some sufferers the secrets have translated into walking again, for others they have restored voices, and for many they have resulted in the lifting of a depression, anxiety and desperation cloud. "There isn't any joking with Dr. Okun about the 10 Secrets for a Happier Life in Parkinson's disease. This book is a critical resource for Parkinson's disease patients and families from around the world who speak different languages, but suffer from very similar and often disabling symptoms." -Muhammad Ali The book addresses current Parkinson's disease issues and also details emerging therapies (DBS, stem cells, vaccines, gene therapy, optogenetics). Okun masterfully breaks down all of the science into an easy to follow and pleasurable reading experience. Parkinson's Treatment: 10 Secrets to a Happier Life is available in over 20 language translations, and also in an audio version. Dr. Okun has truly helped thousands of Parkinson's disease patients and families discover the core values necessary to achieve happiness despite living with a chronic disease.
Michael S. Okun, MD is considered a world's authority on Parkinson's disease treatment, and his publications provide a voice and an outlet to empower people living all over the world. He is currently Administrative Director and Co-director of the University of Florida Center for Movement Disorders and Neurorestoration. The center he runs is unique in that it is comprised of over 45 interdisciplinary faculty members from diverse areas of campus, all of whom are dedicated to care, outreach, education and research. Dr. Okun has been dedicated to this interdisciplinary care concept, and since his appointment as the National Medical Director for the National Parkinson Foundation in 2006, he has worked with the 43 international NPF centers of excellence to help foster the best possible environments for care, research and outreach in Parkinson disease, dystonia, Tourette, and movement disorders. Dr. Okun has been supported by grants from the National Parkinson Foundation, the National Institutes of Health, the Parkinson Alliance, and the Michael J. Fox Foundation for Parkinson's Disease Research, and he currently runs the online international "Ask The Expert" forums, on the National Parkinson Foundation website. The forum is a free service that answers questions from every continent (except Antartica) and has over 10,000 postings in the last 3 years alone. Dr. Okun has dedicated much of his career to the development of care centers for people suffering with movement disorders, but has also has enjoyed a prolific research career exploring non-motor basal ganglia brain features, and he has participated in pioneering studies exploring the cognitive, behavioral, and mood effects of deep brain stimulation (DBS). Dr. Okun holds the Adelaide Lackner Professorship in Neurology, has published over 300 peer-reviewed articles and chapters, is a published poet (Lessons From the Bedside, 1995, available at Amazon.com), and has served as a reviewer for more than 25 major medical journals including JAMA and the New England Journal of Medicine. He has been invited to speak about Parkinson disease and movement disorders all over the world. His published works can be found in many sources and many languages and in such places as the New England Journal of Medicine and on the patient forums and blogs at the National Parkinson Foundation and at http: //www.parkinsonsecrets.com.