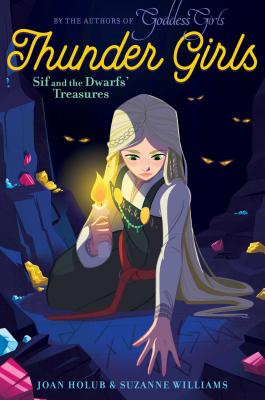 This is book number 2 in the Thunder Girls series.

From the authors of the Goddess Girls series comes the second book in a brand-new series steeped in Norse mythology, magic, adventure, and friendship.

Twelve-year-old Sif is goddess of the harvest, with her abilities woven into her long, blonde hair. She also has special prophetic powers—she is a seer—but is reluctant to share them after a mishap years ago caused a big rift in a friendship that meant a lot to her. And Sif is determined to not let that happen again!

But when the mischievous Loki cuts her hair in a horrible prank gone wrong, Sif orders Loki to fix it. Without her hair, the crops in the land of Midgard—which supplies the wheat for food in Asgard Academy as well—are in danger of dying off.

With Sif and Freya, Loki goes to ask for help from the dwarfs, specifically, the sons of Ivaldi who are all skilled blacksmiths and strikes a bargain with them. They hammer and spin gold into fine golden strands along with a spear and a ship that will grow to full size once in water.

On his way back through the cave, Loki gets an idea for how to get more treasures by playing one set of dwarfs off against another. Envious of the work of the sons of Ivaldi, the dwarfs Brokk and Eitri say they can do better. Loki replies that he doesn’t think they can and that, furthermore, he’ll stake his head on it.

Is that a bet that Loki will regret? And will Sif be able to restore her magical powers to prevent the drought in Midgard?
Joan Holub has authored and/or illustrated over 140 children’s books, including the Goddess Girls series, the Heroes in Training series, the New York Times bestselling picture book Mighty Dads (illustrated by James Dean), and Little Red Writing (illustrated by Melissa Sweet). She lives in North Carolina and is online at JoanHolub.com.

Suzanne Williams is a former elementary school librarian and the author of over seventy books for children, including the award-winning picture books Library Lil (illustrated by Steven Kellogg) and My Dog Never Says Please (illustrated by Tedd Arnold), and several chapter book and middle grade series. She also coauthors the Goddess Girls and Thunder Girls series with the fantastic Joan Holub. Visit her at Suzanne-Williams.com.