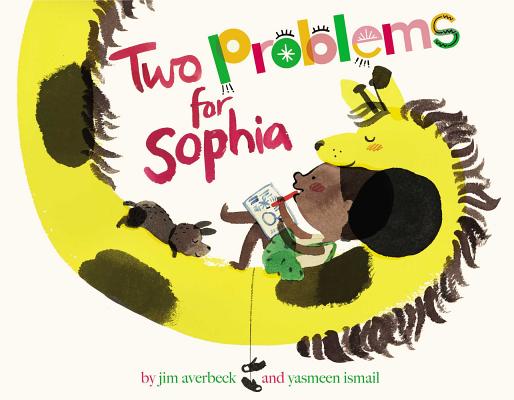 
Not On Our Shelves—Ships in 1-5 Days
Sophia quickly learns her new pet comes with two giraffe-sized problems in this enterprising sequel to One Word from Sophia, which was named one of the best picture books of 2015 by Kirkus Reviews.

Sophia and Noodle, her One True Desire, are together at last.

But Noodle comes with two gigantic problems, and those problems are tearing Sophia’s family apart!

Can a little creative experimenting save Noodle? Or will Sophia have to bid him adieu?
Jim Averbeck is the author of the Sophia series, illustrated by Yasmeen Ismail; In a Blue Room, illustrated by Tricia Tusa; and of the novel A Hitch at the Fairmont. He is also the author and illustrator of the picture books Oh No, Little Dragon! and Except If. He studied children’s book writing and illustration at the University of California Berkeley and now makes his home in San Francisco. You can visit him at JimAverbeck.com.

Irish-born, Bristol-based Yasmeen Ismail is an award-winning author, illustrator and animator. Her first picture book, Time for Bed, Fred, won the V&A Best Illustrated Book Award and The New York Times Best Illustrated Book award. It was shortlisted for the Waterstones Children’s Book Prize, longlisted for the CILIP Kate Greenaway Medal, and nominated for the National Cartoonists Society “Silver Reuben” Award. Following the success of her debut picture book, Yasmeen has been nominated for her other works many times and has been selected by the Society of Illustrators to have her work shown in the Original Art Exhibition in New York four years in a row.
* “Fun, clever, and empowering.” – Kirkus Reviews, starred review

"[An] engaging sequel....Pair this title with Rosie Revere, Engineer by Andrea Beaty or Violet the Pilot by Steve Breen for a female-centric STEM storytime."
— School Library Journal