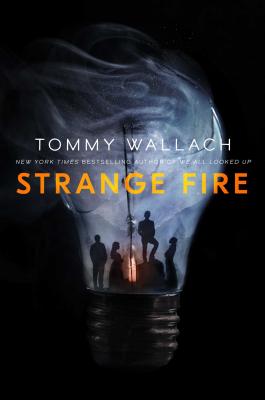 This is book number 1 in the The Anchor & Sophia series.

What if the asteroid heading toward Earth in Tommy Wallach’s New York Times bestselling novel, We All Looked Up, actually hit and demolished our planet?

What if, after thousands of years, two civilizations rose from the ashes? What if those cities found out about each other?

Through the viewpoints of multiple characters, Strange Fire describes the beginnings of an inevitable war between these two civilizations, a war that will pit faith against science, zealotry against technology...and brother against brother.

They said that the first generation of man was brought low by its appetites: for knowledge, for power, for wealth. It was so great, the Lord sent his own Daughter to bring fire and devastation to the world.

Brothers Clive and Clover Hamill, the sons of a well-respected Descendant minister, have spent their lives spreading that gospel. But when their traveling ministry discovers a community called Sophia that's intent on rediscovering the blasphemous technologies of the past, a chain of events will be set in motion.

Alongside Gemma Poplin, Clive’s childhood sweetheart, and Paz Dedios, a revolutionary who dreams of overthrowing the Descendancy, Clive’s and Clover’s paths will diverge, and each will play a part in determining the fate of humanity itself.
Tommy Wallach is the author of the Anchor & Sophia trilogy, Thanks for the Trouble, and the New York Times bestselling We All Looked Up, which has been translated into over a dozen languages. His writing has appeared in McSweeney’s, Tin House, Wired, and other magazines, and he is a MacDowell Fellow. He was signed to Decca Records as a singer-songwriter, and has independently released two full-length albums, including We All Looked Up: The Album, a companion record to his first novel. He currently lives in Los Angeles, where he recently opened up his first escape room, and is working on bringing his novels to various sorts of screens. Grok more at TommyWallach.com.
"Wallach builds a plausible world with richly evocative descriptions of action…a provocative novel of a society riven by subterfuge and zealotry."
— Kirkus Reviews

"The story...carries the reader along for a wild ride that will leave them anxious for the next volume."
— Booklist

"The language is authentic and engaging.This is not a typical dystopian novel, but readers who enjoy a thoughtful storyline will enjoy this first book in a promising series."
— VOYA

"Wallach’s latest is a haunting exploration of our world’s struggles with religion, war, and learning...This beautiful and heartbreaking tale will have all readers eagerly anticipating the next installment."
— School Library Journal