Just Wreck It All (Paperback) 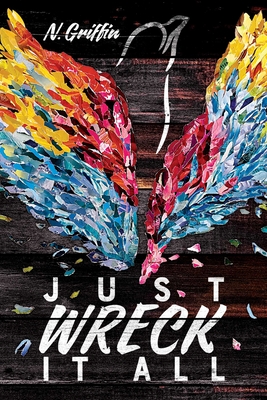 Just Wreck It All (Paperback)


In Stock—Click for Locations
Wracked with guilt due to a horrific accident that maimed her best friend two years earlier, sixteen-year-old Bett’s life is a series of pluses and minuses. But when the pluses start to outweigh the minuses, Bett is forced to confront her self-harming behavior in this powerful novel about self-forgiveness.

Two years ago, Bett was badass. Fearless, feisty, athletic; the type of person who’d bike down a mountain ledge just for the thrill of it. Give her a dare and she’d get it done, no question. But then she dared a friend, and instead of a thrill came horror and guilt.

Now Bett divides her life into Pluses and Minuses. Pluses are anything that make her feel good, things she doesn’t—nope, no way, no how—deserve. Minuses are punishments she doles out to herself—literally, in the form of binge eating—when a Plus can’t be avoided. Now, Bett is extremely overweight, depressed, and the opposite of badass. Which makes her happy. But is that a Plus? Bett’s system is beginning to crack, and revelations of that prank-gone-wrong are threatening to come out.

Just Wreck It All is a blaze of a novel about guilt and self-harm that explores how easy it is to punish ourselves, and just how difficult it is to find the power to forgive ourselves.
N. Griffin is the author of The Whole Stupid Way We Are, for which she was named one of Publishers Weekly’s Flying Start Authors of 2013, as well as Just Wreck It All, Smashie McPerter and The Mystery of Room 11, Smashie McPerter and the Mystery of the Missing Goop, and Trigger. She received her MFA from the Vermont College of Fine Arts.