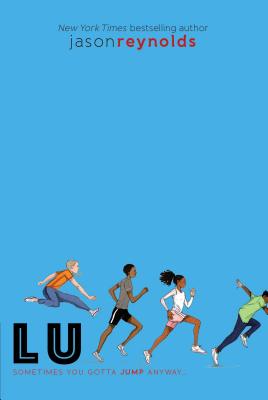 This is book number 4 in the Track series.

Lu must learn to leave his ego on the sidelines if he wants to finally connect with others in the climax to the New York Times bestselling and award-winning Track series from Jason Reynolds.

Lu was born to be cocaptain of the Defenders. Well, actually, he was born albino, but that’s got nothing to do with being a track star. Lu has swagger, plus the talent to back it up, and with all that—not to mention the gold chains and diamond earrings—no one’s gonna outshine him.

Lu knows he can lead Ghost, Patina, Sunny, and the team to victory at the championships, but it might not be as easy as it seems. Suddenly, there are hurdles in Lu’s way—literally and not-so-literally—and Lu needs to figure out, fast, what winning the gold really means.

Expect the unexpected in this final event in Jason Reynold’s award-winning and bestselling Track series.
Jason Reynolds is a #1 New York Times bestselling author, a Newbery Award Honoree, a Printz Award Honoree, a two-time National Book Award finalist, a Kirkus Award winner, a Carnegie Medal winner, a two-time Walter Dean Myers Award winner, an NAACP Image Award Winner, a two-time Odyssey Award Honoree, the recipient of multiple Coretta Scott King honors, and the Margaret A. Edwards Award. He was also the 2020–2022 National Ambassador for Young People’s Literature. His many books include All American Boys (cowritten with Brendan Kiely); When I Was the Greatest; The Boy in the Black Suit; Stamped; As Brave as You; For Every One; the Track series (Ghost, Patina, Sunny, and Lu); Look Both Ways; Stuntboy, in the Meantime; Ain’t Burned All the Bright, and My Name Is Jason. Mine Too. (both cowritten with Jason Griffin); and Long Way Down, which received a Newbery Honor, a Printz Honor, and a Coretta Scott King Honor. He lives in Washington, DC. You can find his ramblings at JasonWritesBooks.com.
Pure gold.
— School Library Journal, starred review

Reynolds wraps up his powerful series with a surprising ending, all while scattering rewarding details about Ghost, Patina, and Sunny to let the reader truly revel in this multidimensional world as it comes to a close.
— Booklist, starred review