The Black Civil War Soldier: A Visual History of Conflict and Citizenship (Hardcover) 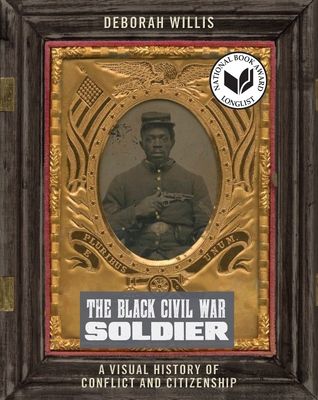 The Black Civil War Soldier: A Visual History of Conflict and Citizenship (Hardcover)

Though both the Union and Confederate armies excluded African American men from their initial calls to arms, many of the men who eventually served were black. Simultaneously, photography culture blossomed--marking the Civil War as the first conflict to be extensively documented through photographs. In The Black Civil War Soldier, Deb Willis explores the crucial role of photography in (re)telling and shaping African American narratives of the Civil War, pulling from a dynamic visual archive that has largely gone unacknowledged. With over seventy images, The Black Civil War Soldier contains a huge breadth of primary and archival materials, many of which are rarely reproduced. The photographs are supplemented with handwritten captions, letters, and other personal materials; Willis not only dives into the lives of black Union soldiers, but also includes stories of other African Americans involved with the struggle--from left-behind family members to female spies. Willis thus compiles a captivating memoir of photographs and words and examines them together to address themes of love and longing; responsibility and fear; commitment and patriotism; and--most predominantly--African American resilience. The Black Civil War Soldier offers a kaleidoscopic yet intimate portrait of the African American experience, from the beginning of the Civil War to 1900. Through her multimedia analysis, Willis acutely pinpoints the importance of African American communities in the development and prosecution of the war. The book shows how photography helped construct a national vision of blackness, war, and bondage, while unearthing the hidden histories of these black Civil War soldiers. In combating the erasure of this often overlooked history, Willis asks how these images might offer a more nuanced memory of African-American participation in the Civil War, and in doing so, points to individual and collective struggles for citizenship and remembrance.
Deborah Willis is University Professor and Chair of the Department of Photography & Imaging at the Tisch School of the Arts at New York University and has an affiliated appointment with the College of Arts and Sciences, Department of Social & Cultural Analysis, and Africana Studies. Willis is the author of Posing Beauty: African American Images from the 1890s to the Present; Reflections in Black: A History of Black Photographers - 1840 to the Present; Let Your Motto be Resistance - African American Portraits; Envisioning Emancipation: Black Americans and the End of Slavery with Barbara Krauthamer; and Michelle Obama: The First Lady in Photographs. Both Envisioning Emancipation and Michelle Obama received NAACP Image Awards.