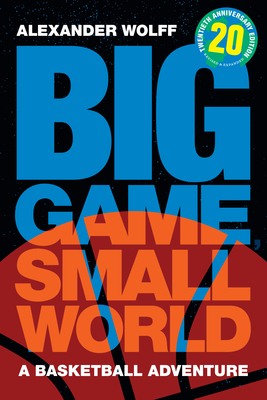 During the late 1990s, eminent basketball journalist Alexander Wolff traveled the globe to determine how a game invented by a Canadian clergyman became an international phenomenon. Big Game, Small World presents Wolff's dispatches from sixteen countries spread across five continents and multiple US states. In them, he asks: What can the game tell us about the world? And what can the world tell us about the game? Whether traveling to Bhutan to challenge its king to a pickup game, exploring the women's game in Brazil, or covering the Afrobasket tournament in Luanda, Angola, during a civil war, Wolff shows how basketball has the power to define an individual, a culture, and even a country.

This updated twentieth anniversary edition features a new preface in which Wolff outlines the contemporary rise of athlete-activists while discussing the increasing dominance within the NBA of marquee international players like Luka Dončic and Giannis Antetokounmpo. A loving celebration of basketball, Big Game, Small World is one of the most insightful books ever written about the game.

Alexander Wolff is a journalist, editor, and author. Formerly a Senior Writer at Sports Illustrated, he is the author and coauthor of several books, including The Audacity of Hoop: Basketball and the Age of Obama, Raw Recruits (with Armen Keteyian), and Endpapers: A Family Story of Books, War, Escape, and Home.