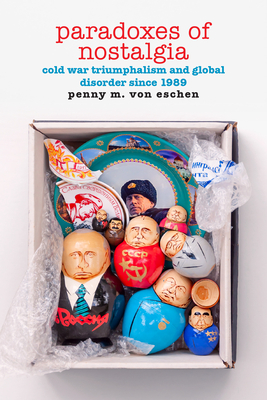 
On Our Shelves Now at:
In Paradoxes of Nostalgia Penny M. Von Eschen offers a sweeping examination of the cold war's afterlife and the lingering shadows it casts over geopolitics, journalism, and popular culture. She shows how myriad forms of nostalgia across the globe--from those that posit a mythic national past to those critical of neoliberalism that remember a time when people believed in the possibility of a collective good--indelibly shape the post-cold war era. When Western triumphalism moved into the global South and former Eastern bloc spaces, many articulated a powerful sense of loss and a longing for stability. Innovatively bringing together diplomatic archives, museums, films, and video games, Von Eschen shows that as the United States continuously sought new enemies for its unipolar world, cold war triumphalism fueled the ascendancy of xenophobic right-wing nationalism and the embrace of authoritarian sensibilities in the United States and beyond. Ultimately, she demonstrates that triumphalist claims that capitalism and military might won the cold war distort the past and disfigure the present, undermining democratic values and institutions.
Penny M. Von Eschen is William R. Kenan Jr. Professor of American Studies and Professor of History at the University of Virginia and author of Satchmo Blows Up the World: Jazz Ambassadors Play the Cold War and Race against Empire: Black Americans and Anticolonialism, 1937-1957.