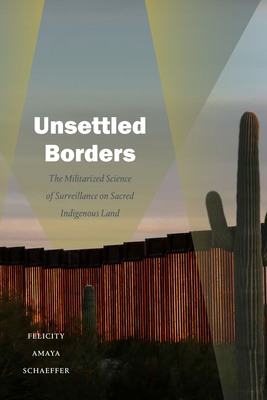 
Not On Our Shelves—Ships in 1-5 Days
In Unsettled Borders Felicity Amaya Schaeffer examines the ongoing settler colonial war over the US-Mexico border from the perspective of Apache, Tohono O'odham, and Maya who fight to protect their sacred land. Schaeffer traces the scientific and technological development of militarized border surveillance across time and space from Spanish colonial lookout points in Arizona and Mexico to the Indian wars, when the US cavalry hired Native scouts to track Apache fleeing into Mexico, to the occupation of the Tohono O'odham reservation and the recent launch of robotic bee swarms. Labeled "Optics Valley," Arizona builds on a global history of violent dispossession and containment of Native peoples and migrants by branding itself as a profitable hub for surveillance. Schaeffer reverses the logic of borders by turning to Indigenous sacredsciences: ancestral land-based practices that are critical to reversing the ecological and social violence of surveillance, extraction, and occupation.
Felicity Amaya Schaeffer is Professor of Feminist Studies and Critical Race and Ethnic Studies at the University of California, Santa Cruz, author of Love and Empire: Cybermarriage and Citizenship across the Americas, and coeditor of Precarity and Belonging: Labor, Migration, and Noncitizenship.