Chicanx Utopias: Pop Culture and the Politics of the Possible (Historia USA) (Paperback) 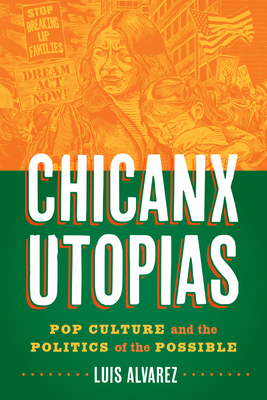 Chicanx Utopias: Pop Culture and the Politics of the Possible (Historia USA) (Paperback)

Amid the rise of neoliberalism, globalization, and movements for civil rights and global justice in the post–World War II era, Chicanxs in film, music, television, and art weaponized culture to combat often oppressive economic and political conditions. They envisioned utopias that, even if never fully realized, reimagined the world and linked seemingly disparate people and places. In the latter half of the twentieth century, Chicanx popular culture forged a politics of the possible and gave rise to utopian dreams that sprang from everyday experiences.

In Chicanx Utopias, Luis Alvarez offers a broad study of these utopian visions from the 1950s to the 2000s. Probing the film Salt of the Earth, brown-eyed soul music, sitcoms, poster art, and borderlands reggae music, he examines how Chicanx pop culture, capable of both liberation and exploitation, fostered interracial and transnational identities, engaged social movements, and produced varied utopian visions with divergent possibilities and limits. Grounded in the theoretical frameworks of Walter Benjamin, Stuart Hall, and the Zapatista movement, this book reveals how Chicanxs articulated pop cultural utopias to make sense of, challenge, and improve the worlds they inhabited.

Luis Alvarez is an associate professor of history at the University of California, San Diego. He is the author of The Power of the Zoot: Youth Culture and Resistance during World War II.