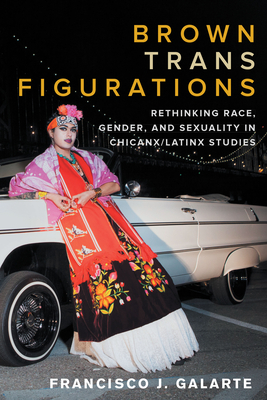 Within queer, transgender, and Latinx and Chicanx cultural politics, brown transgender narratives are frequently silenced and erased. Brown trans subjects are treated as deceptive, unnatural, nonexistent, or impossible, their bodies, lives, and material circumstances represented through tropes and used as metaphors. Restoring personhood and agency to these subjects, Francisco J. Galarte advances “brown trans figuration” as a theoretical framework to describe how transness and brownness coexist within the larger queer, trans, and Latinx historical experiences.

Brown Trans Figurations presents a collection of representations that reveal the repression of brown trans narratives and make that repression visible and palpable. Galarte examines the violent deaths of two transgender Latinas and the corresponding narratives that emerged about their lives, analyzes the invisibility of brown transmasculinity in Chicana feminist works, and explores how issues such as transgender politics can be imagined as part of Chicanx and Latinx political movements. This book considers the contexts in which brown trans narratives appear, how they circulate, and how they are reproduced in politics, sexual cultures, and racialized economies.

Francisco J. Galarte is an assistant professor of American Studies and Women, Gender and Sexuality Studies at the University of New Mexico. He is a coeditor of TSQ: Transgender Studies Quarterly and the author of the essay "Transitions: The Dolorous Return of a Chicana/o Trans-Fronterizo," in Claiming Home, Shaping Community: Testimonios de los valles. His work has also appeared in Aztlán: A Journal of Chicano Studies and Chicana/Latina Studies.

[Brown Trans Figurations'] most accessible sections provide thorough and rewarding analyses of popular culture...scholars in the fields of Latinx and gender studies will appreciate this detailed look at an underexplored subject.
— Publishers Weekly

A needed contribution to trans Latinx studies. [Brown Trans Figurations] offers a series of compelling close readings of literature, photography, film, and other accounts of Chicanx trans people and representation in the United States.
— Los Angeles Review of Books

Brown Trans Figurations is an extremely well-written and groundbreaking book, accessible yet simultaneously quite complex, in Latina/o/x studies. It will be required reading in queer, trans, women’s, gender, and sexuality studies and in American studies and ethnic studies classrooms...Brown Trans Figurations is crucial reading for persons interested in the differences between queer and trans Latinx experience, the tensions between Chicana feminism and transgender and transsexual lives, and the racism that infects dominant representations of trans and queer Chicanxs and Latinxs...Galarte’s theorization of brown trans fgurations transforms Latina/o studies in profound ways.
— Latino Studies