Afghanistan: Between Hope and Fear (Hardcover) 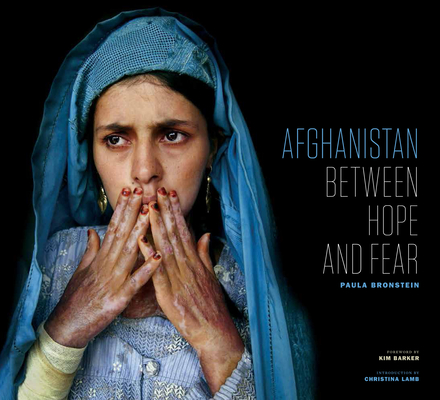 Afghanistan: Between Hope and Fear (Hardcover)


Special Order—Subject to Availability
One of the world’s leading female photojournalists presents a powerful photo essay of daily life in war-torn Afghanistan, offering the most complete visual narrative history of this pivotal Middle East country currently in print.

". . . the book is a must-see for anyone with any interest in Afghanistan, the plight of women internationally or photography."
—Kim Barker, New York Times Lens Blog

The Afghan people are standing at a crucial crossroads in history. Can their fragile democratic institutions survive the drawdown of US military support? Will Afghan women and girls be stripped of their modest gains in freedom and opportunity as the West loses interest in their plight? While the media have largely moved on from these stories, Paula Bronstein remains passionately committed to bearing witness to the lives of the Afghan people. In this powerful photo essay, she goes beyond war coverage to reveal the full complexity of daily life in what may be the world’s most reported on yet least known country.

Afghanistan: Between Hope and Fear presents a photographic portrait of this war-torn country’s people across more than a decade. With empathy born of the challenges of being an American female photojournalist working in a conservative Islamic country, Bronstein gives voice to those Afghans, particularly women and children, rendered silent during the violent Taliban regime. She documents everything from the grave trials facing the country—human rights abuses against women, poverty and the aftermath of war, and heroin addiction, among them—to the stirrings of new hope, including elections, girls’ education, and work and recreation. Fellow award-winning journalist Christina Lamb describes the gains that Afghan women have made since the overthrow of the Taliban, as well as the daunting obstacles they still face. An eloquent portrait of everyday life, Afghanistan: Between Hope and Fear is the most complete visual narrative history of the country currently in print.

Bronstein is one of America’s most distinguished female photojournalists and one of the few women internationally who cover war and conflict. Her many honors include the Faber Award of the Overseas Press Club, the National Press Photographer’s Association Photographer of the Year award, and multiple wins of Pictures of the Year International (POY-I). She was also a finalist for the Pulitzer Prize and the Leica Oskar Barnack Award. Afghanistan: Between Hope and Fear is her first book, and it has already been a finalist for three major photography book awards: the CDS/ Honickman First Book Prize in Photography, the European Publishers Award for Photography, and the FotoEvidence Book Award.

Former South Asia bureau chief for the Chicago Tribune and now a reporter for the New York Times, Barker is the author of The Taliban Shuffle: Strange Days in Afghanistan and Pakistan, which was adapted into the film Whiskey Tango Foxtrot, starring Tina Fey.

Currently a foreign-affairs correspondent for the (London) Sunday Times, Lamb has been named Foreign Correspondent of the Year five times; she has also been awarded the Prix Bayeux, Europe’s most prestigious prize for war correspondents, and the British OBE. A best-selling author who has been traveling to Afghanistan since 1987, her most recent book is Farewell Kabul: From Afghanistan to a More Dangerous World.

"A collection of photographs that whiplash from beautiful to horrific, a visual compendium of what has happened on the ground during America’s longest war . . . the book is a must-see for anyone with any interest in Afghanistan, the plight of women internationally or photography."
— Kim Barker

"Bronstein's collection of photos is impressive . . . It is a feast of imagery that could not have been served at a better moment in history, the protracted conflict having dulled Afghanistan to American sensibilities . . . [She] remains committed to portraying those who might otherwise be forgotten in a seemingly endless conflict. In doing so, her images evoke emotions that are like Afghanistan itself, caught in that space between hope and fear."
— CNN

"Paula Bronstein’s photographs convey the impression that she is fond of, and touched by, the people she decided to photograph. . . . This book is not only remarkable but truly impressive and extraordinary. Paula Bronstein makes one understand because she makes one feel. She created a deeply moving testimony of life."
— F-Stop

"The most powerful portrait of Afghanistan I've come across—these are images that you will never forget."
— South China Morning Post

"Far from wrapping herself in the veil of her own consciousness, [Bronstein] unflinchingly confronts the unattractive reality before her and challenges any viewer who might not wish to acknowledge such unpalatable facts."
— Lens Culture