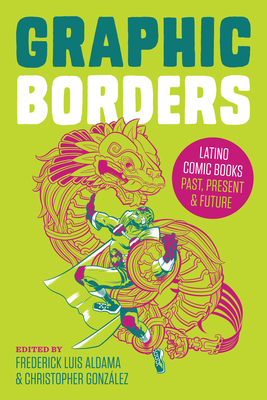 From the influential work of Los Bros Hernandez in Love & Rockets, to comic strips and political cartoons, to traditional superheroes made nontraditional by means of racial and sexual identity (e.g., Miles Morales/Spider-Man), comics have become a vibrant medium to express Latino identity and culture. Indeed, Latino fiction and nonfiction narratives are rapidly proliferating in graphic media as diverse and varied in form and content as is the whole of Latino culture today.

Graphic Borders presents the most thorough exploration of comics by and about Latinos currently available. Thirteen essays and one interview by eminent and rising scholars of comics bring to life this exciting graphic genre that conveys the distinctive and wide-ranging experiences of Latinos in the United States. The contributors’ exhilarating excavations delve into the following areas: comics created by Latinos that push the boundaries of generic conventions; Latino comic book author-artists who complicate issues of race and gender through their careful reconfigurations of the body; comic strips; Latino superheroes in mainstream comics; and the complex ways that Latino superheroes are created and consumed within larger popular cultural trends. Taken as a whole, the book unveils the resplendent riches of comics by and about Latinos and proves that there are no limits to the ways in which Latinos can be represented and imagined in the world of comics.

Christopher González is an assistant professor of English at Texas A&M University-Commerce.

Graphic Borders is a meaty and expansive read, with a core through-line of unpacking the idea that Latina/o comics are redrawing the known borders of comics narrative. . . . The writing in this collection is strong and compelling, the themes wide ranging and cohesive, and the message highly relevant. If you want to get a great sense of what Latino/a comics are doing in the culture right now, this is a necessary starting point to your journey.
— Journal of Graphic Novels and Comics

For those wanting a deeper look at the wells of artistic styles, cultural trends, and historical pressures that influenced our current crop of Latino artist-authors, this anthology digs wide and deep.
— Pasatiempo

While the collection itself speaks more to notions of Latino culture and comic books in popular culture, the volume is wisely constructed to convey critical looks toward various dynamics of culture as a whole. . . In today’s contentious understandings of national, state, and urban borders, the use of comic books lays out an intriguing history of these political dynamics. . . Graphic Borders is a thorough look at Latino culture and comic books that engages subjects like borders, gender, history, politics, and sexuality in a cohesive collection of essays.
— Popular Culture Studies Journal

The essays in Graphic Borders do not fail to amaze, and the marshalling of such a wide variety of topics and comics by Aldama and González is nothing short of breathtaking. Whether for the comics novice or aficionado, this collection will introduce the reader to new modes of graphic narrative analysis and will shine as a lodestar for future scholarship in the years to come.
— Studies in Twentieth and Twenty-first Century Literature

The anthology undoubtedly advances the scholarship on Latin@ comics in resourceful ways, as it brings to the fore the Latin@ intellectual multiverse.
— Latino Studies

Graphic Bordersquestions and redefines the 'American way,' building in new fissures, i.e. new territories that one can walk into to experience the Latino imagery, especially Latino comic imagery, in a new way.
— Canadian Journal of Latin American and Caribbean Studies