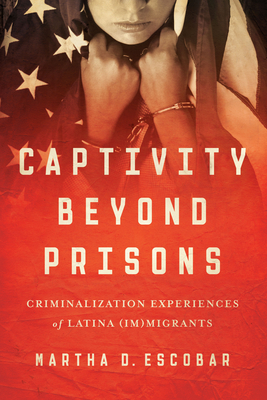 Today the United States leads the world in incarceration rates. The country increasingly relies on the prison system as a “fix” for the regulation of societal issues. Captivity Beyond Prisons is the first full-length book to explicitly link prisons and incarceration to the criminalization of Latina (im)migrants.

Starting in the 1990s, the United States saw tremendous expansion in the number of imprisoned (im)migrants, specifically Latinas/os. Consequently, there was also an increase in the number of deportations. In addition to regulating society, prisons also serve as a reproductive control strategy, both in preventing female inmates from having children and by separating them from their families. With an eye to racialized and gendered technologies of power, Escobar argues that incarcerated Latinas are especially depicted as socially irrecuperable because they are not considered useful within the neoliberal labor market. This perception impacts how they are criminalized, which is not limited to incarceration but also extends to and affects Latina (im)migrants’ everyday lives. Escobar also explores the relationship between the immigrant rights movement and the prison abolition movement, scrutinizing a variety of social institutions working on solutions to social problems that lead to imprisonment.

Accessible to both academics and those in the justice and social service sectors, Escobar’s book pushes readers to consider how, even in radical spaces, unequal power relations can be reproduced by the very entities that attempt to undo them.